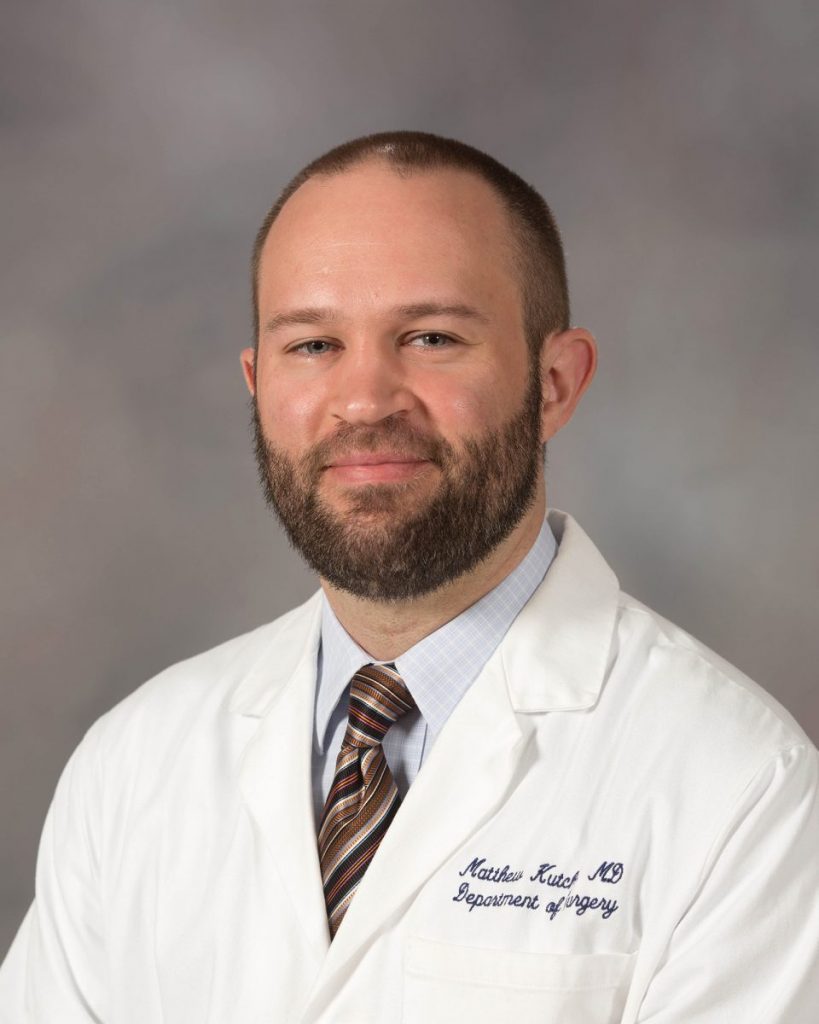 JACKSON, Miss. – Dr. Matthew Kutcher remembers treating a patient who was bleeding profusely from gunshot wounds when he arrived at the University of Mississippi Medical Center’s Adult Emergency Department.

“Both his large artery and the large vein supplying blood to one of his legs were injured,” said Kutcher, an assistant professor of surgery who treats critically ill or injured patients in UMMC’s intensive care units. “He went to a small rural hospital, he received a transfusion of red blood cells, and AirCare brought him to us.”

In fact, the crew on AirCare, UMMC’s medical helicopter transport program, delivered the gravely injured young man straight to the OR. “But even replacing the blood in the operating room as fast as he was losing it, he still had already lost so much that we couldn’t keep his pressure up,” Kutcher said.

“Platelets are the scaffolding for blood clotting,” Kutcher said. “Without platelets, we can’t fix the biological bleeding problem.”

Despite transfusing several times the man’s normal volume of blood with a combination of red blood cells and plasma, and using all of the platelets available in the hospital blood bank, the man ultimately died,” he said.

“Standard blood banking procedure is to store platelets at room temperature. Since the risk of infection is higher when blood products are stored at room temperature than when kept in a refrigerator, platelets can only be stored for up to five days after collection before they expire and have to be thrown out,” Kutcher said.

But what if platelets were also kept in a blood bank refrigerator, which could extend their shelf life to 14 days? What if cold platelets could be given sooner, as opposed to the current practice of waiting to give room-temperature platelets until later?

“Keeping them cold means we could have almost three times the supply,” Kutcher said. “Cold storage means we are more likely to have them on the shelf when we really need them, and could have them available at more smaller hospital blood banks.”

That’s the subject of the Cold Stored Platelet Early Intervention for Hemorrhagic Shock Trial, CriSP-HS for short, to be conducted by six U.S. trauma centers, including UMMC. It’s buoyed by previous studies that show giving traumatically injured patients a combination of red blood cells, plasma and platelets is the best way to keep their blood pressure up while the trauma team works to stop their bleeding.

“What we’re trying to find out is whether using platelets early in injured patients with major bleeding will help stop bleeding faster, and whether refrigeration will allow us to keep platelets on the shelf longer in order to keep our supply up,” said Kutcher, co-investigator of the UMMC site.

“Like many places across the country, our state struggles to keep enough blood on the shelf for use in major bleeding emergencies,” Kutcher said. Just one traumatically injured patient could require upward of 100 units of blood, he said.

Those performing the study, however, might need to forego a traditional step: asking the patient on the front end if they’d like to participate in it, and giving them documents to sign and time to make a thoughtful decision.

When a patient is bleeding profusely and their injuries make it impossible for them to give consent, or when their family is absent or can’t immediately be found, life-saving treatment can’t wait.

CriSP-HS is an “exception from informed consent” trial. Patients in the Emergency Department who meet the criteria will be enrolled, and they or their family will be asked as soon as possible if their participation in the trial can continue, or if they’d like to opt out. 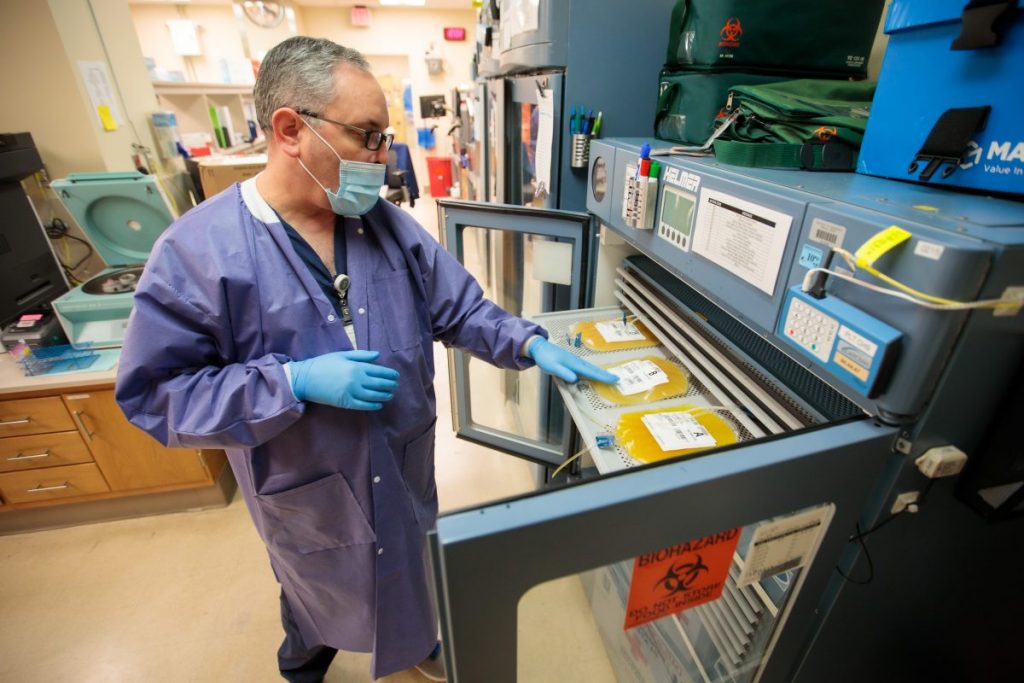 UMMC is the state’s sole Level I Trauma Center and was chosen for the study because of its experience in trauma care, helicopter critical care transport and blood product transfusion protocols and practices. The Medical Center is one of 29 members of the Department of Defense-funded Linking Investigations in Trauma and Emergency Services research network that focuses on blood, breathing and brain research to advance the care of injured patients.

Others taking part in the two-year, multimillion-dollar trial funded by the DOD: Baylor College of Medicine in Houston, Texas; MetroHealth in Cleveland, Ohio; University of California-San Francisco; University of Southern California -Los Angeles; and University of Texas Health Sciences Center-Houston.

It will enroll more than 200 people aged 15 and older. Patients who qualify will randomly receive either one unit of cold-stored platelets alongside any other blood components they are given for transfusion, or the usual standard of care blood transfusions. More explanation can be found at www.litesnetwork.org/crisp-hs

AirCare is the sole medical helicopter program in Mississippi that carries both red blood cells and plasma, point of care blood level analysis and an ultrasound. It transfuses the significant majority of blood and blood products flown by medical air transports in Mississippi. AirCare is the only medical helicopter transport program operating in the state, and one of few in the nation, that stocks and administrates prothrombin complex concentrate to reverse anticoagulant drugs in patients with acute major bleeding.

“Supply issues and temperature requirements for storage make it very challenging for AirCare to carry platelets,” said Dr. Kendall McKenzie, professor and chair of UMMC’s Department of Emergency Medicine. “This study may help change that.  Time is of the essence in trauma, and having the capability to provide platelet transfusions to bleeding patients on the way to the hospital is critical to improving survival.”

Plans call for UMMC to activate the trial this fall, Kutcher said. Because it’s an emergency treatment study, it requires careful review. In coming weeks, Kutcher and others will begin organizing community meetings and visiting small and large hospitals to get in-person feedback. That’s in addition to conducting a web-based survey and forming a community advisory board.

UMMC’s hope is that “we’ll be able to definitively say whether cold-stored platelets can help improve outcomes in injured patients with major bleeding,” said Dr. Larry Martin, chief of the Division of Trauma and Critical Care Surgery.

“If so, this would address a major blood supply logistics issue, and help make critical platelet transfusions more available to patients who need them.”

This research is supported by Department of Defense contract W81XWH-16-D-0024 W81XWH19F0494. Any opinions, findings and conclusions or recommendations expressed in this material are those of the

Please forward this message to colleagues who might be interested. If you wish to be removed from this list or know of a colleague to add, send an email message to mrolph@umc.edu.

About the University of Mississippi Medical Center

UMMC is the state’s only academic medical center. Its education, research and health care missions share the objectives of improving the health of the state’s population and eliminating health disparities.

Located in Jackson, UMMC encompasses seven health science schools, including medicine, nursing, health related professions, dentistry, pharmacy, graduate studies and population health. The Medical Center’s health care enterprise includes the state’s only Level I trauma center, only children’s hospital, and only organ and bone marrow transplant program. The Medical Center also is home to a Telehealth Center of Excellence, one of two in the nation.

For more information, visit www.umc.edu or click here to view news and features stories produced by UMMC Communications and Marketing.