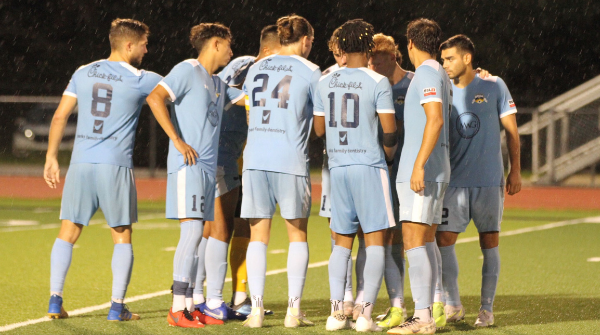 CLINTON, Miss. – Despite late heroics from Orlando Lozano, Mississippi Brilla FC’s 2021 season came to an end with a penalty kick loss to Kalamazoo FC. After 120 minutes, the match ended 1-1, but the Michigan-based club was able to win the penalty kick shootout 4-1.

The match began with a flurry of Brilla chances. Luke Bryant, Marco Astorga, and Jalen James each decent opportunities in the first six minutes of action. However, none of their shots were able to pierce the back of the net.

The two teams went into the halftime break scoreless. But after the break, it was Kalamazoo who broke the deadlock.

In the 56th minute, Enrique Banuelos drove into the Brilla defensive third and hit a long-distance strike that beat keeper Alejandro Chavarria. The goal put Kalamazoo FC ahead 1-0.

Brilla had a lengthy wait for the equalizer, but the team’s patience was rewarded by defender Orlando Lozano. In the seventh minute of stoppage time, Arnold Onyango’s long throw-in eventually found Jalen James. James headed the ball into the path of Lozano, and the Colombian struck the ball beautifully into the bottom corner. The goal came on practically the last kick of the match, and it sent the crowd into a frenzy.

30 minutes of extra time were played, but the match still could not find a victor. The two teams headed to penalty kicks.

In the shootout, all four Kalamazoo shooters found the back of the net. Only David Medeiros scored for Brilla, so the match ended with a Kalamazoo win on penalties.

Mississippi Brilla FC ended the season with a 9-3-3 record. Though the team’s season ended on a low, Brilla won its first USL League Two division title since 2015. The team also won its first playoff match since the 2017 season.