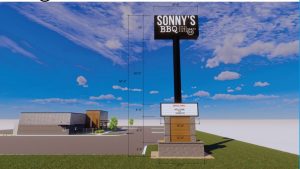 Concept rendering by Sonny’s showing how they would like to design their sign, which is not in accordance with Clinton’s interstate corridor sign ordinance. An amendment to change the ordinance to allow for this style of sign was tabled by the Board of Alderment.

Amendments to the Interstate Corridor Sign ordinance were discussed, then tabled for more discussion, at the Board of Aldermen’s July 6 meeting. The proposed changes to this amendment were initially prompted by discussion about the changes at the May 4 Board meeting, which was the result of the Board asking Director of Community Roy Edwards to conduct some research about other interstate corridor signs in the area.

Edwards displayed two renderings of the Sonny’s BBQ signs proposed by the company for Clinton, as well as some of the shorter signs in the city.

Ward 3 Alderman Jim Martin mentioned that the Interstate Corridor Sign ordinance was adopted just a few months ago, and that already there was consideration to amend it.

“I appreciate your work on this; however, I’d like to have seen some of the things you have seen regarding what other folks have done before we amend our ordinance.” Martin added that he would like for the Board to be able to look at some of the background materials that Edwards looked at in order to review it again before they have to file the procedure for the amendment. He made a motion to table the agenda item in order to review materials before it comes up for a vote again. The Board unanimously passed the motion to table. 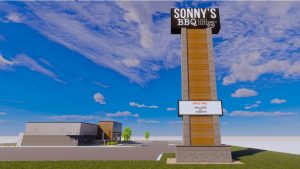 At the Board’s May 4 meeting, Rick Thomas, the director of construction for Sonny’s BBQ, presented a rendering with a 5-foot pedestal base and a 10-foot masonry section between the pedestal and sign post, topped by a 30-foot steel pole and a 10-foot-tall sign at the top of the pole.

The proposed amendment presented to the Board July 6 allows for the signs to be constructed with brick, stone, EIFS, stucco “or other materials compatible with a primary building on the same lot. The height of the base must be a minimum of 25 percent of height of sign structure.”

Amending the ordinance to allow construction to be of compatible materials with the primary building and to allow the base of the sign to be 25 percent of the height of the sign structure would allow Sonny’s BBQ sign, and other similar interstate corridor signs, to only be required to use brick, stone, EIFS and stucco as the base, and would allow a steel pole, for example, instead of masonry, to comprise another 30 feet of the sign.