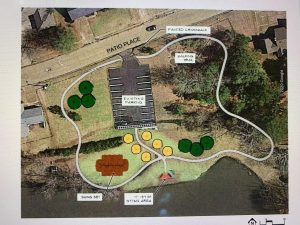 Plans for the first city park on the east side of Clinton in Ward 6 were delayed because of a lack of costs and concrete plans for the facility. The Easthaven Homeowners Association is willing to donate land to the City for specific purpose of developing a park; however, without an idea of costs and firm plans, the Board of Aldermen tabled a resolution by a vote of 6-1 (Ward 3 Alderman William O. Barnett was the dissenting vote) to proceed with the land donation until there is more detailed information about the scope and cost of the project.

Parks and Recreation Adam Wade brought the proposal before the Board, however, when questioned, Wade did not have enough details about the project to satisfy most of the aldermen.

The area proposed for the park will be in a green space of a Planned Unit Development, or PUD, that was set up as part of the development. The homeowners association was established in the late 1970s and funded by annual fees collected by property owners in the development. Fees were used to maintain a clubhouse, swimming pool, a parking lot, a greenspace and tennis courts. Over the years, the facilities have fallen into extreme disrepair and are no longer usable, which prompted the association to approach the City about donating land to the City for a park.

After Wade initially met with the Easthaven Homeowners Association board members, the 67-home association approved the land donation for a park. Wade said the last budget included $22,472 to develop neighborhood parks.

Wade said plans are for a “very minimalistic park with some walking trails, benches and swings.”

“For those of you guys that don’t know, this is, like Adam said, an issue that the neighborhood of Easthaven is dealing with,” Ward 6 Alderman James Lott III said. “If you ever get a chance to drive by, that building is extremely dilapidated. There are holes in the windows, holes in the walls.” Equipment, including the oven and refrigerator, have been stolen from the building. “This is a blight in the area; something that really needs to be taken care of,” Lott added.

“I think it’s a great idea for the city to have a neighborhood park, and I believe it’s the first one in the city in Easthaven and Ward 6; it’s in a much-needed area. But one of the things that we are concerned with it total cost of the [project],” Lott said.

Lott asked Wade for an estimate for how much it will cost to demolish the building and fill in the swimming pool. Wade said he would work with the Department of Public Works, and they could provide work on the project. There would be no cost on the dirt work to level the ground, however, “as for the building being torn down, it would be the normal cost.”

“When you say ‘normal cost,’ what does that mean?” Ward 1 Alderwoman Karen Godfrey asked. Director of Public Works Philip Lilley responded that the process would be the same as when the City tears down a house. They order large dumpster bins, for “somewhere between $300 and $400 a bin,” Lilley said. Basically, the City will handle labor and dirt, with the balance of the costs paid by the landowner.

Alderwoman Godfrey asked about lighting in the area, since there are safety concerns about the activities currently going on in the dilapidated area.

“To me, one of the issues is safety…if we don’t do some kind of lighting, we’re going to bright back where we were to start with. I feel like that needs to be part of the project; the walking trails and some lighting, to make it safer,” said Godfrey

“One of the issues that I have with lighting in parks is that in Kids Towne Park, it is very dark in the back of the park,” Wilbanks said. “I would hate to approve something that we’re already not including lighting in a situation and a neighborhood that needs safety and something that is not a negative but is a positive.”

Lott agreed. “The citizens of Clinton and Ward 6 deserve great lighting, a great park, and a great place to walk and run.”

“By accepting the land and the cost of it, too – once we accept the land, we are responsible for it. We need to look at the overall layout of it, and the cost of it, too, before we get into something like that. A lot of these projects sound good, but you start adding the trails and the lighting, whether you put picnic tables and pavilions and bathrooms, they can kind of escalate into all sorts of things. I think if we’ve got a better concept of what we’re really going to do and comfortable with the cost of it, I’d feel better.  I think putting it all together for us to consider is better than doing it haphazard all the way,” said Ward 2 Alderman Jim Martin.

Godfrey made a motion to table the agenda item until cost information and details for the park could be put together, and Martin seconded the motion.

Barnett, who was the lone dissenting vote to table the motion, said that he doesn’t want the Board to “drag it out, but wants to be ready to make a decision by the next meeting.”

Wade suggested he could talk to the contractor who is doing work at Robinson Park to get some numbers and figures ready for the next meeting.

A Facebook user who was watching the live stream of the meeting commented in support of the Board’s requiring more information: “No approvals of blank checks by the Board members during this meeting; I really like how the Board members are having those asking for funds to go back to the drawing board and provide them itemized cost[s] before they make their final decisions.”

The next meeting of the Board of Aldermen will be on July 20 at 7 p.m. in the Municipal Courtroom. It will also be live streamed on the City of Clinton’s Facebook page.