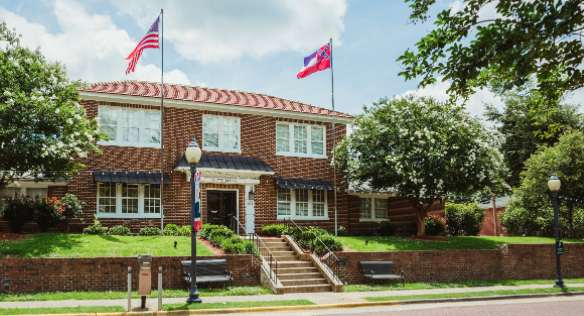 For the third Board meeting in a row, the Board of Aldermen approved volunteers for service on City committees. At the August 17 meeting, Garrett DeYoung and Sam Minter were unanimously approved to serve on the Parks and Recreation Advisory Committee, and Caroline Hoff, a long-time volunteer and familiar face at Quisenberry Library, was approved unanimously to serve on the City of Clinton Library Committee.

Ward 4 Alderman Chip Wilbanks nominated both DeYoung and Hoff for their positions.

DeYoung, a long-time resident of Clinton, is an environmental engineer with the Mississippi Department of Environmental Quality. He graduated from Mississippi State University with a BA and MBA.

Wilbanks said he talked at length with DeYoung about the Board appointment, and DeYoung is very committed.
“He grew up here in Clinton and is one of our great Clinton families,” Wilbanks said. “He certainly is very familiar with our parks here in Clinton, having grown up in those parks.”
“I’m excited for the opportunity to give back,” DeYoung said. “I grew up in Clinton going to the parks, being around Traceway, Brighton Park and all the other parks, and always enjoying the amenities. I look forward to the opportunity to give back to others, whether it is youth, college students or families that are trying to establish and grow in Clinton.”

A retired teacher at Clinton Public Schools, Hoff is a graduate of Mississippi College.
“She has been committed to the library and city of Clinton over and above,” Wilbanks said. “She’s been a member of the Friends of the Library board, she’s been president of the board, and she volunteers at the library,” Wilbanks continued, adding that the last time he talked to her she was on her way to the library. “We should all be thankful for her past commitment and her willingness to serve on this committee.”
“The library is a valuable part of the community and goes back to my childhood,” Hoff said. “I do a lot whenever I can to make the community more aware of what the library has to offer.”
“When Chip asked me to serve, I told him I’d do whatever they want me to do; I’ll do it for the library,” Hoff said. As Hoff understands it, she will serve in an oversight role for funds on the City of Clinton Library Committee. Funds were given to the library when it opened fifteen years ago, Hoff explained.

Mayor Phil Fisher nominated Sam Minter for the Parks and Recreation Advisory Committee.
“This will be a Mayoral selection,” Fisher said, adding that Sam Minter has worked tirelessly on Robinson Club Park and owns the building in front of the park where a restaurant is located.
Minter is a Jackson State University graduate and a Vietnam veteran.
“He has been a very helpful and dedicated person to the parks,” Fisher said.
Minter explains that volunteering is part of his and his family’s makeup.
“We just do what we can.”

Marilyn taught for forty-three years, retiring in 2015.
“From early on at age 19, I was drafted. Every young man needs at least one year of boot camp. That creates a sense that they can deal with some things early on in life they might not otherwise get to experience,” Minter said.
Sam and Marilyn Minter have three daughters, who have all gone on to serve their communities.

Their eldest daughter is a school principal and former Miss Tougaloo. She lives in Gluckstadt. Their middle daughter, who teaches nursing at LSU, lives in Shreveport, Louisiana. She graduated from MC Nursing School with honors.
Their youngest daughter, an attorney who lives in Georgia, is a former Miss JSU and the first Miss Hospitality for the state of Mississippi in 2003. All three daughters are affiliated with churches and do what they can to help in their communities.

“It’s better to give; helping is what it’s all about,” Minter said. “That’s just part of our makeup, actually – to be able to respond and do what we can.”