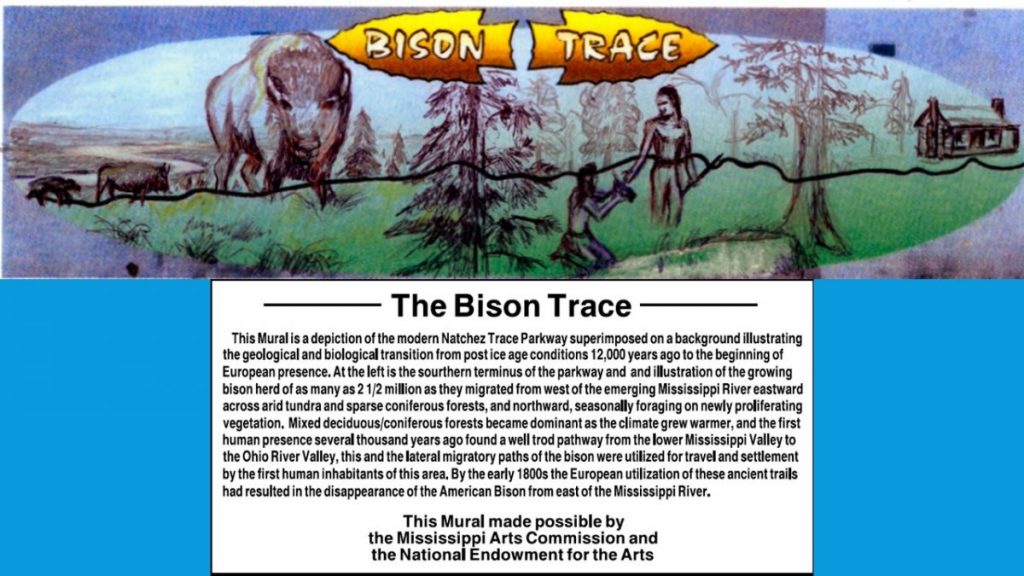 An item that first appeared on the Board of Aldermen’s meeting agenda on July 17 and was tabled after more information was requested, was unanimously approved at the August 17 Board meeting. The item was for a Natchez Trace-related mural on the side of Indian Lanes Bowling Center, for which Clinton artist Paul Gore received a Mississippi Arts Commission and National Endowment for the Arts grant.

The initial rendering only featured two red and yellow arrowhead shapes with the words “Bison Trace” on them in white type, and an oval-shaped lime green vignette in the background.

The rendering presented to the Board at the August 17 meeting, however, provided more details, featuring a life-sized bison, a building from the era of the Natchez Trace, and appropriate flora and fauna for that time period.

Roy Edwards, Clinton’s Director of Community Development, presented the updated mural image to the Board. The Planning and Zoning Commission and the Architectural Review Committee had approved the mural, with the stipulation that the side of the building be completely painted and that a UV inhibitor be applied over the entire wall and mural.

“My comment is to make some changes to the colors of the arrowheads,” Ward 1 Alderwoman Karen Godfrey said.

“You have to designate a color,” Mayor Phil Fisher explained, after Godfrey requested a color change to the arrowheads. Several Board members laughed and confessed they aren’t artists, so, after some discussion, the Board members agreed the arrowhead fill color should be a shade of brown.

Stipulating in their motion that the side of the building should be properly cleaned and painted white before the mural is applied, and also asking for the arrowheads to be filled in with brown instead of a red and yellow vignette, the Board approved the mural design 7-0.

Gore was not present when the mural was approved, however, he arrived later in the meeting and was brought up-to-date on the discussion and approval of the mural by the Board.

“The colors are a limitation of the computer,” he said. He assured the Board that the actual fill colors of the arrowheads on the mural will be a shade of brown, which he explained is historically accurate.

Now that the Board has approved the mural design, the power-washing, cleaning and base painting of the mural is set to begin soon, Gore said.