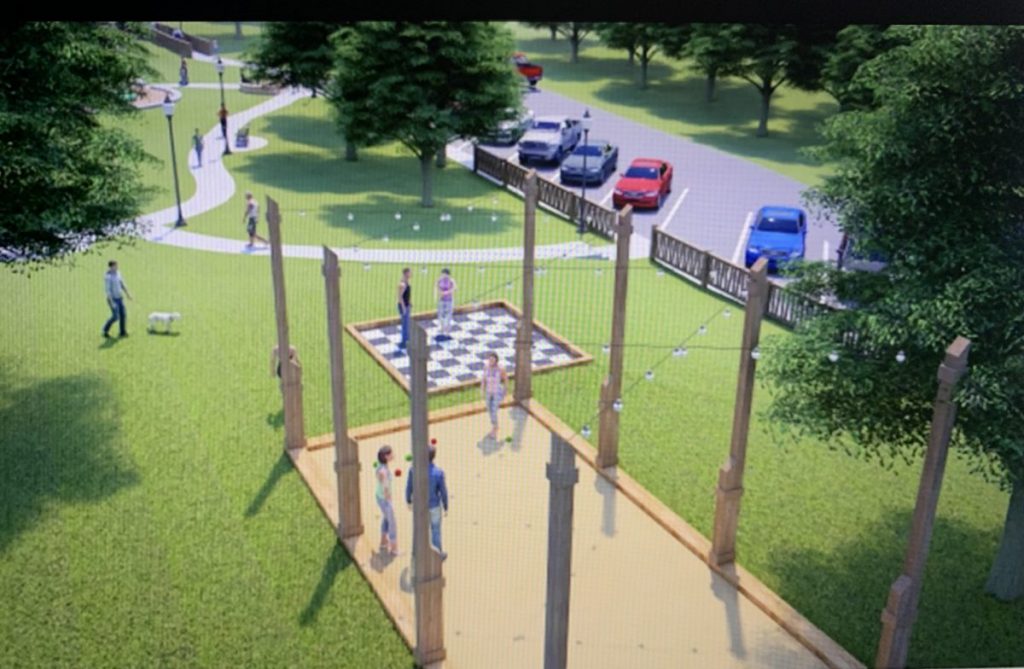 Lions Club Park won’t just be for kids anymore, with plans underway to add an adult area to the popular park. This area has been discussed for some time by the City, however, the first step towards making it a reality happened at the September 21 meeting of the Board of Aldermen, who approved a bid of $28,287.50 from Wildstone Construction LLC for construction of the adult area.

At the meeting, Mayor Phil Fisher stressed that as half of the funds had been pledged by a corporate sponsor, he is seeking funds for the other half of the cost from a second sponsor, so that no funds will be required from the City.

“This [Wildstone] is the same company that just completed – and did a fine job – at Robinson Park,” Fisher said. Initial plans are for a cornhole court for adults; the checkerboard shown in the rendering during the Board meeting is not planned at this time. The motion was approved unanimously. Fisher said that, since Wildstone is already set up with equipment in Clinton from the Robinson Park project, they were going to move over to complete the adult area at Lions Club Park, which will take about three days.

The scope of work for the Adult Area includes a 50-foot long by 25-foot wide area with a crosstie border and 4-feet of zero crushed limestone; a sidewalk leading from the existing sidewalk to the adult area; lighting and dirt/sod as needed to finish off the area.

During the “Other Business” portion of the Board meeting, a priority list of road repairs discussed at the Monday, September 20 work session was approved for City Engineer Bill Owen to submit to the legislature to bid for road funding. The competitive funding opportunity comes up every four years from the legislature, with a dozen cities vying for the funds. The funds are awarded by a points system, with the roads in the worst condition carrying the highest number of points, which means the cities with the roads in the worst condition are in line for more funding.

The next regular Board meeting will be at 7 p.m. on Tuesday, October 5, at the municipal courtroom at 305 Monroe Street.