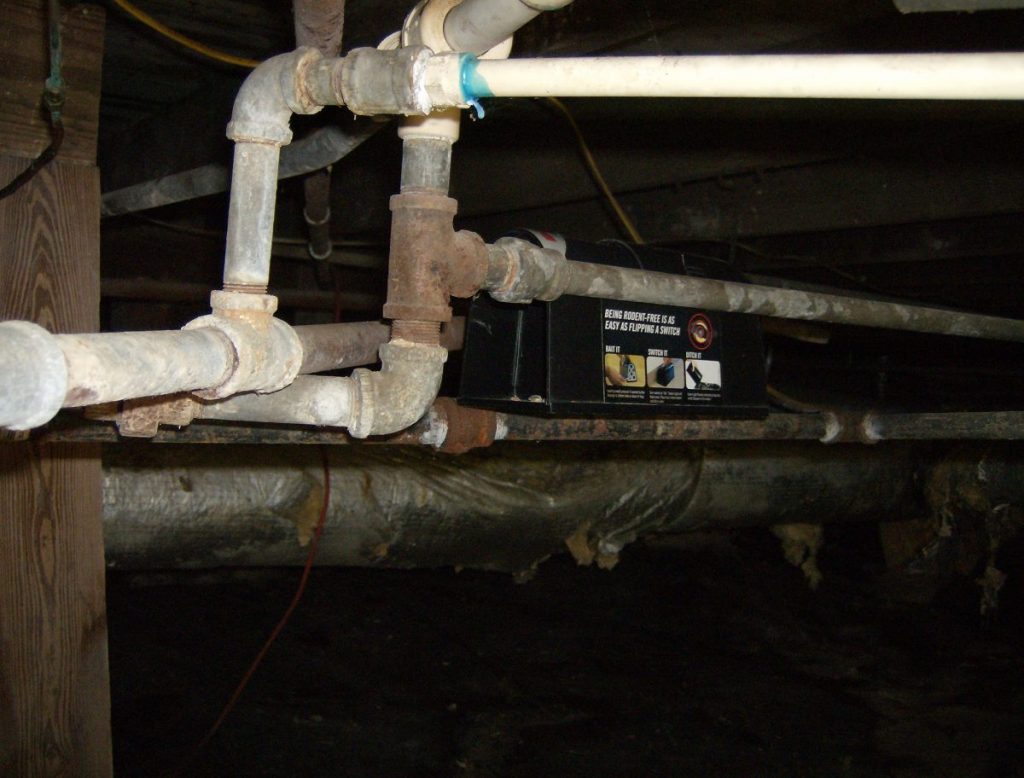 Miss Sherry and I live in a circa 1863 house in Olde Towne, Clinton.  Our house has had at least two major extensions and several interior rearrangements during the past 158 years.  As we are taking our turn at caring for this part of Clinton’s history, we have learned to accept that there are no simple fixes to anything that needs attention or updating, and that whoever last fixed what we are fixing again did their best with what they had at the time; judge not, lest ye be judged.

I have spent literally several years, though it seems longer, closing all of the holes that lead under the house; well obviously not ‘all’ of the holes.  When I arrived we had cats, raccoons, possums and rats under the house at various times and for varying lengths of time.

Before the Civil War, apparently air and convection was the technology used to accomplish insulation and air conditioning, respectively.  The exterior walls of our olde house do not sit on top of the subfloor, but instead are open to the crawl space and to the attic, so whatever animal is under the house can climb up into the attic.

I am guessing that the air inside the exterior walls was the insulation and the hotter air in the attic caused the cooler air under the house to be drawn up inside the walls and into the attic, sort of like air conditioning or a very slow fan.  Not 100% effective at cooling the house.

For those of you who are thinking that we now could blow insulation into the outside walls to help our actual air conditioner during the eleven summer months, that answer is no.  Been there, done that, or tried anyway.  Yes you can and we did blow insulation into the exterior walls but it all ended up in the crawl space under the house; doing this again definitely will earn you a Mr. SmartyPants award and a round of sarcastic applause.

After stalling for an appropriate amount of Dad time, I crawled under the house to set an electronic trap for the rat and baited it with sunflower seeds.  Since we have a double dose of ants under the house I quickly learned that any ant edible bait is a very bad idea, and the popular “use peanut butter” is just plain dumb and stupid.  Sunflower seeds work great; they are dry so they do not short out the rat trap and apparently ants do not like them.

I have a camera under the house pointed at the rat trap so I do not have to crawl under the house to check the trap; trust me, you do not want to leave a dead rat under your house for days during the summer so you need to retrieve it soon after its demise.

The camera can “see’ in the dark and also has a motion detection feature which is how I discovered that just one more rat had made its way under the house.  Any rat, or moth for that matter, will trip the motion detector and the camera DVR will record a couple of minutes so the source of the movement can be quickly identified.

After the trap was baited and set, the rat returned.  Rats are incredibly smart; I could see the rat, recorded by the camera, discovering the sunflower seeds and deciding how to get them for a snack.  It is very cautious and approaches the trap very tentatively for a couple of days.  I also learned that if anything moves, even slightly, the rat will stare at that area and not approach the trap.

I made some more trips around the house, looking for that “last” hole allowing the rat to gain access.  As always, I found some likely candidates and plugged them or covered them with small mesh wire.  I persuaded myself once again that I must have found and sealed the last hole.

On the fifth day the rat convinced himself that the trap was indeed safe and started to eat the path of sunflower seeds inside the trap.  After a few minutes he ate his way far enough into the trap to trip it; I removed him from the trap the next morning and reset and baited the trap again just in case I was seeing more than one rat.