The Clinton High School Alumni Association recently announced the establishment of the John S. Weatherly Accounting Excellence Award. Funding for this new scholarship was provided by John Weatherly’s daughter, Dr. Jenifer Weatherly Ingle, who lives in Charlotte, North Carolina. Dr. Ingle graduated from the Mississippi School for Math and Science before completing her undergraduate studies and medical school at the University of North Carolina at Chapel Hill.
Mr. Weatherly graduated from CHS in 1970. He was on the Honor Roll for four years, a member of the CHS band for four years, and a member of the varsity tennis team for two years. 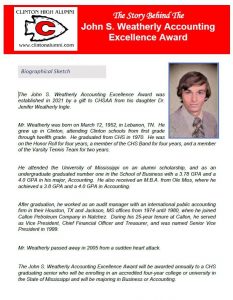 He attended the University of Mississippi on an alumni scholarship and graduated number one in the School of Business with a 4.0 GPA in his major, accounting. He also received an M.B.A. from Ole Miss, where he also achieved a 4.0 GPA in accounting.
After graduation, he worked as an audit manager with an international public accounting firm in their Houston, Texas, and Jackson, Mississippi, offices from 1974 until 1980, when he joined Callon Petroleum Company in Natchez. During his twenty-five-year tenure at Callon, he served as Vice President, Chief Financial Officer and Treasurer, and was named Senior Vice President in 1999.

Mr. Weatherly passed away in 2005 from a sudden heart attack.
The John S. Weatherly Accounting Excellence Award will be awarded annually to a CHS graduating senior who will be enrolling in an accredited four-year college or university in the State of Mississippi and will be majoring in business or accounting.