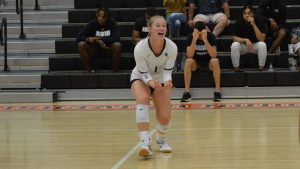 Laurendine have recently etched their names into the school’s record books.

Kurz broke the school’s 8K record at Louisville’s Live in the Lou Classic late last month. The junior ran a time of 24:15.9, breaking teammate Evan Del Rio’s record, which was set in 2019. Kurz, who transferred from Kentucky Wesleyan, was named GSC Runner of the Week for his efforts.

Kurz and the Choctaws have had an impressive season, tallying two team titles in the process so far.

Laurendine of Clinton, broke the school record in assists in the Lady Choctaws’ win over West Alabama. The junior tallied 21 against the Tigers, giving her 1,776 assists in her Mississippi College career. She broke the record of 1,756, which was previously held by Sydney Chandler.