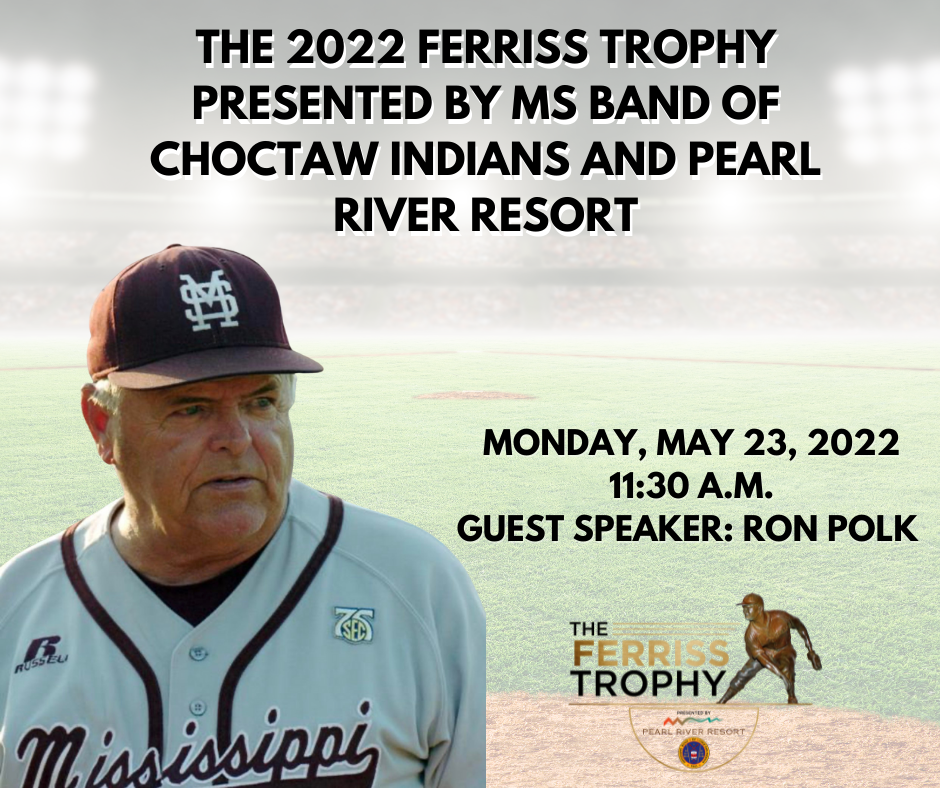 The Mississippi Sports Hall of Fame and Museum along with the Pearl River Resort and the Mississippi Band of Choctaw Indians is pleased to announce that Hall of Fame Baseball Coach Ron Polk will be the featured speaker at the presentation of the 2022 Ferriss Trophy.  The Ferriss Trophy is named in memory of the former Major League star and long-time Delta State baseball coach Dave “Bo” Ferriss and annually goes to the Most Outstanding College player in Mississippi each year.  This will be the 18th presentation of the award.  The winner will be announced at luncheon held at the Sports Hall of Fame in Jackson on May 23rd.

Polk, the legendary coach who is a member of six Halls of Fame is best known for his two terms as the Head Baseball Coach at Mississippi State.  He guided the Bulldogs from 1976 thru 1997 and returned in 2002 thru 2008.  Overall, his record stands at 1373-702-2.  His teams won 5 SEC Championships, 5 SEC Tournaments, played in 23 NCAA Tournaments and went to the College World Series 8X.  Currently Polk resides in Starkville and serves as a Special Assistant to the Athletic Director at Mississippi State.  He was inducted into the Mississippi Sports Hall of Fame in 1998 and was the 2017 recipient of the “Rube Award” for his service to sports in the state.

The list of previous winners of the Ferriss Trophy include current professional players Drew Pomeranz, Chris Stratton, Hunter Renfroe, Brent Rooker, Nick Sandlin and two-time winner Jake Mangum.  This will be the first in-person presentation since 2019, the 2020 season was cancelled and the 2021 presentation was virtual.