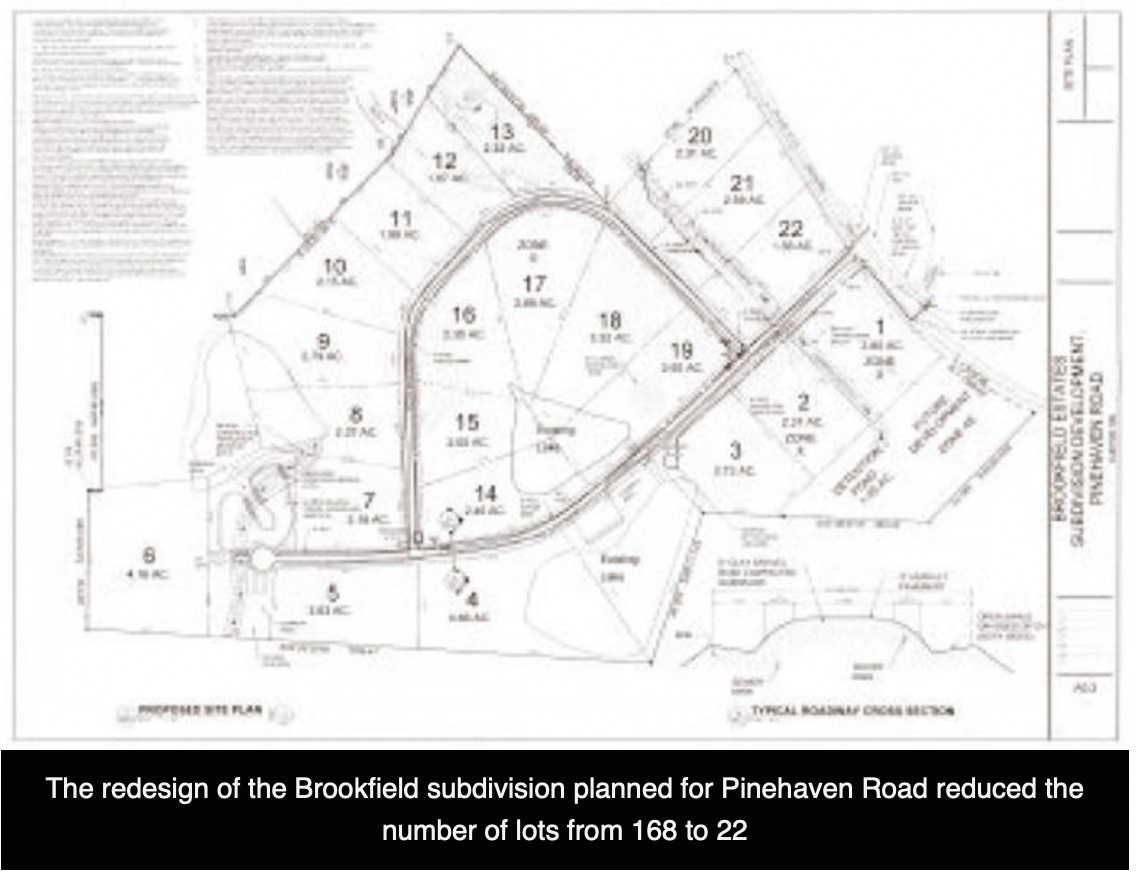 A lot has happened in the nine years since a residential development in north Clinton first received Board of Aldermen approval. The cost of construction has gone up, and so has the public’s appetite for larger lots. Developer Ben Walker has responded by getting the Board’s approval to change the configuration of his Brookfield subdivision—again.

As originally proposed in 2013, a total of 129 lots were planned, spread across almost eighty acres on Pinehaven Road at Williamson Road, with lot sizes ranging from a quarter-acre to a half-acre. Then, in 2017, Walker asked the aldermen to rezone the property from R-1 residential to R-1 planned unit development (PUD). With the PUD designation, about forty lots were added to the subdivision designed to appeal to millennials and to Baby Boomers looking to downsize to a smaller home with high quality amenities and little time needed for lawn care.

At the July 19 Board meeting, the developer got approval to go back to R-1 residential zoning and to reduce the number of lots in Brookfield from 168 to 22. The smallest lot will be one and two-thirds acres, and the largest will be just over four and a half acres. Five of the lots will be less than two acres, fourteen will be between two and three acres, one is between three and four acres and two are larger than four acres.

“We felt this would be a lot better for everyone concerned,” Walker told the aldermen. That’s partly because of the time and cost involved. “Doing 160 some-odd lots is just bigger than really what I wanted to do,” he said.

He gave an example of rising construction costs—the price of PVC pipe jumped thirty-eight per cent a couple of months ago.

But there was another reason to build fewer homes with bigger yards.

“I got bombarded with calls from people who wanted these larger lots,” he said.

Walker is already taking non-binding contract reservations, which will give those with their eyes on a particular lot first dibs when the property goes on sale. He had accepted four of those reservations over the course of a week and a half.

“It does give you an indication that people are interested in having large lots.”

“It’s always nice to have new residential development in town,” Martin said. “A lot of people like postage stamp-sized lots with no mowing. I’m very pleased to see that there is a demand [for] some nice-sized lots and large houses. It looks like an extremely nice development.”