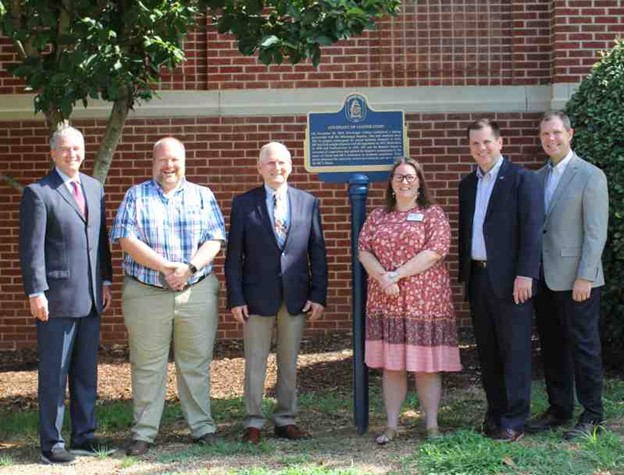 The longstanding and productive relationship between Mississippi College and Mississippi Baptists was formally acknowledged recently during a dedication ceremony for a new historical marker on MC’s main campus in Clinton.

“Only God knows what this cooperative effort has wrought, and what it will continue to mean to Mississippi, our nation and the world,” said Dr. Anthony Kay, executive director of the Mississippi Baptist Historical Commission, to those gathered around the gold-lettered Covenant of Cooperation sign near the front steps of the Leland Speed Library, which houses the Baptist Historical Commission. Kay said the marker will inform generations of students about the integral relationship between the University and Mississippi Baptists.

Founded in 1826, Mississippi College is a private, coeducational, Christian university of liberal arts and sciences. The state’s oldest institution of higher learning, MC was originally unaffiliated with any religious denomination until the 1840s, when it was briefly associated with Methodist and Presbyterian leadership. Financial difficulties returned MC to the ownership of local citizens in 1850, when, under the leadership of Rev. Benjamin Whitfield, the Mississippi Baptist Convention assumed ownership.

Together, the relationship between MC and Mississippi Baptists has survived the Civil War, the Great Depression, and two world wars. One of the state’s leading private universities, MC is America’s second-oldest Baptist-affiliated university and the first college to grant degrees to women.

Thompson likened the historical marker dedication to a time of religious renewal.

“When I was growing up, we had revival every year,” Thompson said. “It was a time to renew and revive commitment. I think that’s what we’re doing today. This sign is another renewal of that commitment between the churches and our school. I’m proud of it, and I’m thankful for it.”

As an example of that commitment, in 2021, MC launched a church partnership program to give back to the Baptist churches in the state that have supported the University throughout the years. The agreement allows students who are members of Baptist churches to be considered for scholarships of at least $10,000 annually.

“This partnership is available to any Baptist church in the state of Mississippi,” said Dr. Evan Lenow, director of church and minister relations at MC. “They have all contributed to the mission of MC through their gifts to the Cooperative Program.”

“Dr. Lenow has been active over the last couple of years in renewing our commitment to churches across this state,” Thompson said. “What this sign recognizes is a renewing of that commitment.

“I think it’s good and healthy for us to do that time and time again.”

After acknowledging the vital role of his predecessor, Dr. Jim Futral, in obtaining and placing the historical marker, Parker said the sign fittingly represents the decades of faithful partnership between MC and Mississippi Baptists.