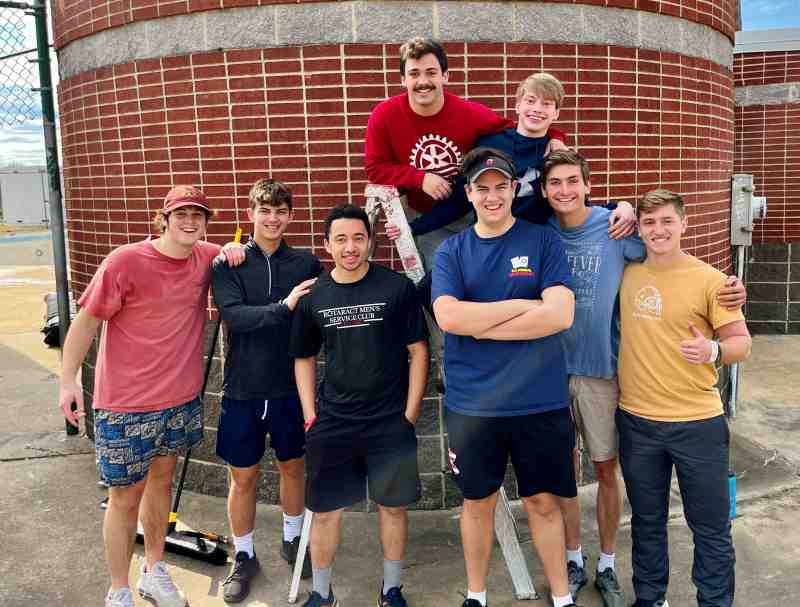 Volunteers and MC students pause for a photo near the end of the Midtown pool renovation. They include, front row from left, Hinson Wilson, Asa Poche, Jeffrey Neville, Chris Loftis, Timothy Martin, and Luke Horst, and back row from left, David Torrent and Will Shea.

Residents of the Midtown area of Jackson found relief from the relentless Mississippi heat and experienced the love of the Lord this summer, thanks to an enterprising Mississippi College graduate.

Scott Fortenberry ‘02, pastor of Soul City Church, guided members of his congregation, local residents, and teams of volunteers – including several MC students – to restore the neighborhood swimming pool that had long been abandoned on the corner of Mill and Whitfield Streets.

That renovation project helped members of a community with few entertainment options to coalesce around a common goal of providing a positive recreational outlet for its residents.

Fortenberry understands the value of safe recreational exercise to a community. After attending Hinds Community College, he transferred to MC, where he played on the varsity baseball team while earning his degree in Christian studies. He went to New Orleans Theological Seminary and, after marrying his wife, Candiss, moved to Orlando, Florida, to become a youth pastor.

He pastored his first church in Lake County, Florida, then served as pastor of Forest Baptist Church for five years. While in the midst of what he describes as a 13-month “family vacation” in Florida, serving as a family pastor in St. Petersburg, he felt drawn back to the Magnolia State.

“After three or four months in St. Petersburg, my wife and I looked at each other and agreed it wasn’t fair to go into middle-class churches and ask them to have a heart for inner-city communities when we weren’t living there ourselves,” he said.

In 2016, the Fortenberrys moved to Midtown Jackson to plant a church, and Soul City Church was born. What started as a small group of mostly family members – primarily the Fortenberrys and their five children – has grown to a congregation of about 50 that meets on Woodrow Wilson Drive near the University of Mississippi Medical Center and Millsaps College.

The church follows what Fortenberry calls the “upside down model” of ministry.

“We look for practical ways to serve the city first,” he said, “whether cutting grass, fixing sinks, or being a shoulder for someone to cry on. We look for a need in the city and do our best to meet that need.

“Serving the city gives us the opportunity to invest our lives intentionally. People in the neighborhood serve alongside us in everything that the church does. When you serve with somebody and meet their needs, and they have the opportunity to use their gifts to meet someone else’s needs, the natural byproduct is whole life worship.”

The most visible example of that ministry is the sparkling neighborhood pool that now serves as a beacon of hope in the midst of a community that has had more than its share of abandonment and decline.

“In our neighborhood, there are three big areas of need: fatherlessness, aimless teenagers, and joblessness,” Fortenberry said. “The swimming pool had sat empty in our neighborhood for at least eight years. It gave the negative visual connotation that something not being used brings.”

Fortenberry solicited assistance from churches throughout the state as he began removing the remaining water, renovating the pool area, pressure washing the grounds, replacing the pumps, painting the bathrooms, and restoring the fixtures. He had intended to complete the project last summer, but the unavailability of certain materials and other supply chain issues prevented the pool from opening in 2021.

Undeterred, Fortenberry set to work in February to get the pool ready this year. He had plenty of assistance.

David Torrent, a senior math education major from Oxford and a member of Rotaract, was among a number of MC students who assisted with the pool renovation. Soul City Church is one of Rotaract’s philanthropies.

“Soul City has allowed us to serve in many ways over the years,” Torrent said. “The guys in Rotaract enjoy working on a project that they can see results from, a project that helps more than just our club or even just Soul City. Scott had shared his vision with us about renovating the Midtown Pool for a while.”

He said one look at the abandoned pool area revealed the impressive amount of work that would be required to complete the renovation.

“There were dead weeds all around the fence line, litter, dirt, and leaves covered the sidewalk,” Torrent said. “We didn’t have many ladders, and the fences were pretty tall, so a couple of us would pair up, one person on the other’s shoulder, to reach the top weeds.

“There was mildew and leaves in the mostly-drained pool. The bathrooms were probably the worst part, though. They smelled awful and had not been cleaned in years. We worked on all of that and, although we didn’t finish all the projects, we did put a good dent in them to make it easier for future teams.”

In time, volunteer teams managed to complete the project, and on the third Sunday of July, the pool officially opened with a worship service.

“We baptized two teenagers out of our neighborhood in that pool,” Fortenberry said. “The local TV stations came out to cover the opening, and we were on the news baptizing people in the name of Jesus.

“The project was a true expression of the body of Christ coming together.”

Throughout the summer, as many as 40 children used the pool each day. It even provided some jobs for the community – one of the newly hired lifeguards recalled learning to swim in that pool years earlier. And Soul City Church added new congregants – all because of the renovated pool.

“One of the greatest joys I’ve had is watching teenagers in our neighborhood who act ‘hard’ all the time come to the pool as kids who don’t have to prove anything to anybody,” Fortenberry said. “I also wouldn’t have anticipated how many dads have brought their kids to the pool – several of them would sit at the pool or splash around with their kids.”

Torrent said the Rotaract members who worked on the project were happy with the results.

“After seeing the pool in action, I saw how much the community had missed a place like the Midtown Pool,” he said. “Scott’s vision of giving kids positive outlets to release their energy and spend their time is a great one.”

During Labor Day weekend, Fortenberry baptized additional new church members. He now likes to call the pool “one of the largest baptistries in the state.”

The pool closed after that weekend, but Fortenberry expects it will likely reopen for Memorial Day 2023. In the meantime, he anticipates enlisting volunteers for plenty of other projects to help spread the Gospel of Jesus through service.

“The success of the pool project has given us a stamp of approval that we can do big things for the Lord,” he said. “It proves our ability to facilitate projects that can make a huge impact on the community we serve.

“I’ve done many outreach projects in my life, but this pool may have been one of the best I’ve ever been a part of.”