An email from a reader led to a series of events last week. One was a slightly negative dining experience and the other led to the creation of a dish that brought back memories of an unforgettable meal at Carmine’s in New York City. I don’t want to get ahead of the story, so here’s how it began.

The reader asked the difference between what she’d always assumed were two different dishes – chicken Parmigiana and chicken Parmesan. A little research revealed that while one name is more exotic, they’re basically different names for the same recipe. And, with a name that includes the word “Parmigiana”, you might assume this recipe is 100% Italian. While it did originate in Italy, the original dish’s primary ingredient was breaded, fried strips of eggplant. At other times, favorite Italian meats like pork or veal served as the main ingredients.

It was only after Italians immigrated to America and settled primarily along the East Coast that they got a little more creative with the classic dish from the Old Country. Unlike their Italian grandmothers, they added whatever protein was least expensive and available at the corner market. In many cases, that proved to be chicken. A little tinkering with the ingredients led to the name being Americanized to “chicken parmesan,” or chicken parm.

After passing on these little jewels of knowledge, a craving for the dish, using whatever name anyone wanted to call it, led me to order it at an Italian restaurant last week. I won’t embarrass the restaurant by listing its name (I will say it was the first time I’d visited, so it’s never been mentioned in my column). However, I have to say, I was let down by its version of the dish elegantly listed as “chicken parmigiana.”

The red sauce was thin and tasteless and cheese was applied with a very controlling hand. I had to search desperately to find the angel hair pasta hidden underneath the breaded chicken breast. I will say the perfectly-breaded, seasoned and pan-fried chicken was the dish’s redeeming quality, but only by a small margin.

Last, I know these are trying times for restaurants, but being served a somewhat-pricey dish without even a cup of iceberg lettuce drizzled with dressing or a breadstick to round out the meal did little to elevate the dining experience.

Finally, I’m getting to the positive part of the week. After leaving the restaurant without the satisfying chicken parmagiana experience I’d sought, I went home and pulled out my Carmine’s cookbook. I replicated (or at least, attempted) the chicken parmesan my friends and I had enjoyed at the famed eatery in NYC’s Times Square.

Carmine’s recipe is a little lengthy, but if you’d like to try it, drop me an email and I’ll send it to you. In the meantime, here’s an easier version of chicken parmagiana. Since it’s an abbreviated recipe, we’ll just call it chicken parm. 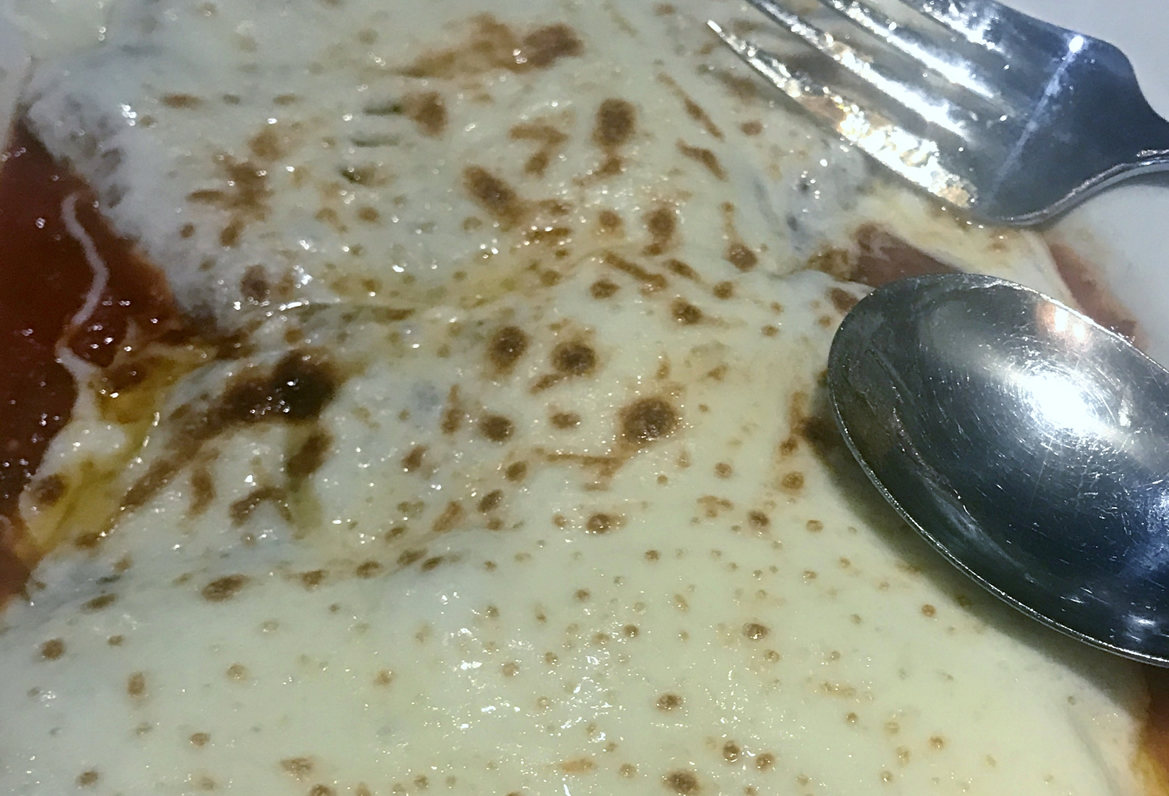 The chicken parmigiana at Carmine’s in New York City, photographed during my trip in December, 2019 with friends, is perfectly prepared. A thick topping of melted cheese and a base of tangy sauce are the perfect foil for the crispy chicken.

Easiest Chicken Parm This Side of Italy

In a bowl, combine the bread crumbs, 1 cup of the Parmigiano Reggiano, oregano, thyme and remaining salt and pepper. Mix well to combine with cheese. Place flour in another shallow bowl, then use a whisk to beat the eggs in a third bowl. Line a baking sheet with aluminum foil for easy clean up. Dredge the chicken in the flour, coating evenly, then dip in the eggs, letting any excess drip off; then dredge in the panko mixture, turning and patting to make sure they’re evenly coated. Place the breaded chicken on the foil-covered baking sheet.

Preheat the broiler and set an oven rack about 4 inches from the heating element. Meanwhile, bring the marinara sauce to a simmer over low heat. Cover and keep warm. Line another baking sheet with aluminum foil; set aside.

In a large nonstick skillet, cover the bottom of the pan with oil over medium heat. Place 5-6 tenders in the pan in a single layer and cook until the first side is golden brown, 2-3 minutes. Flip the chicken and cook for another 2-3 minutes, until golden and cooked well. Cook the remaining chicken in the same manner, adding additional oil only if necessary and adjusting heat to insure chicken doesn’t get too brown. Place the cooked chicken on the second foil-covered baking sheet.

Equally sprinkle the mozzarella and remaining Parmigiano Reggiano or Parmesan over the center of the chicken tenderloins. Place baking sheet containing chicken under the broiler until the cheese is melted and bubbling, 1 to 2 minutes.

Place a serving of pasta into each individual plate, then add a piece of chicken. Spoon marinara sauce over the cheese, leaving the edges of the chicken bare to insure crispiness.

Kara Kimbrough is a food and travel writer from Mississippi. Email her at kkprco@yahoo.com.