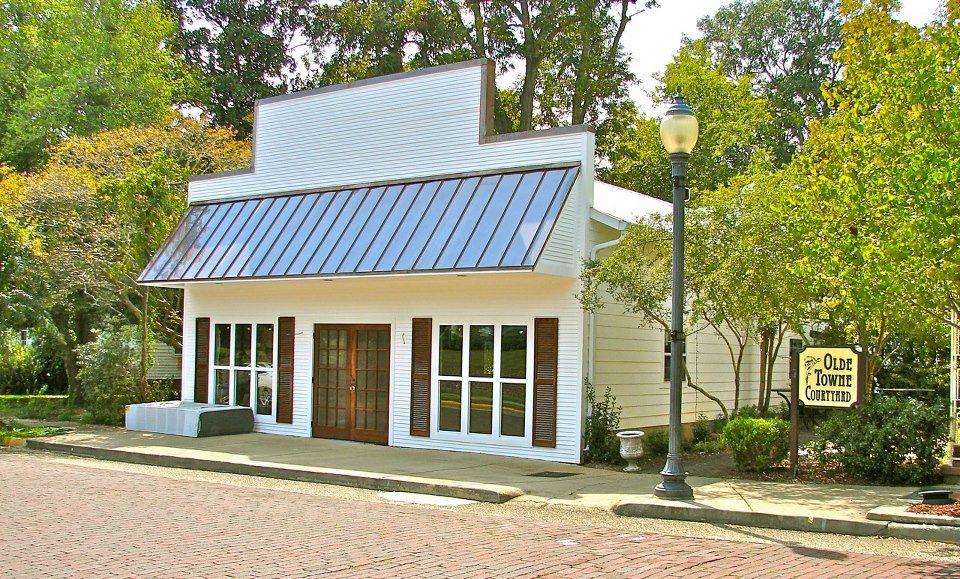 Lot 15 is the way the property was identiﬁed on the original 1829 plat of the town of Clinton. Located between Leake and Main streets, the lot occupied half of the block fronting Jefferson Street on the west side in Clinton’s small commercial area before the Civil War. During the war, the house and store on the lot burned. The lot was vacant when William and Carrie Lewis bought it in the 1870s and moved their home, “Tanglewood,” to the location.
Captain Lewis commanded the Mississippi College Riﬂes for most of the war and built a livery stable on the north half of the lot. His stable was a ﬁxture in town and a popular gathering place for men to talk politics, horses and share gossip. Lewis was an alderman in Clinton in the early twentieth century.
After Lewis’s death in 1921, John Fox bought “Tanglewood” and the stable. Fox’s wife, Carrie, was a niece and namesake of Carrie Lewis. Fox divided the lot and sold the livery stable to Ed and Fred Ratliff, who set up a bicycle shop and later added a gasoline tank and pump for a service station.

It was on a hot summer day in 1925 when the Ratliff brothers saw a tall, slim man walking towards them with two empty jerry cans. The man turned out to be an airplane pilot who had run out of gasoline and had to land in a pasture west of Clinton. He was ﬂying to Hawkins Field in Jackson on a barnstorming tour, giving people rides in the plane for $5. He hoped to raise enough money to buy a new airplane. The Ratliff brothers ﬁlled his cans and helped him refuel the plane. In return, the pilot gave each a ride to show his appreciation. The brothers, one by one, had the rare experience of ﬂying over little Clinton, seeing the streets, the town and the college from the air. They waved at the people on the ground, who stared in wonder at the rare sight of an airplane in the sky.
The pilot told the Ratliff brothers his name—Charles Lindbergh—but it didn’t mean anything to them in 1925. But when Lindbergh ﬂew nonstop from New York to Paris and to world fame the next year, the brothers realized they were a small part of history.
The Ratliff brothers acquired an automobile dealership and moved their shop and service station to College Street, east of the college. They never tired of telling the story of the day Charles Lindbergh walked into town.
The livery stable became Neely’s Hardware Store after the Ratliffs relocated, and Dave Callahan, Sr., bought the business in 1944. Callahan was Clinton’s city clerk for a time. After his death, the building on Lot 15 became an antique shop.
When the present owner of the site planned a restaurant where the old livery stable once stood, he discovered there was no foundation for the building; so construction of the restaurant started with a foundation ﬁrst, then a new building in the style of the livery stable.
Lot 15 today has street numbers. “Tanglewood,” now being restored by General Phil Fisher and his wife Kathy, is 301 Jefferson Street. The restaurant where the livery stable once stood should be 303 Jefferson.
A person standing in front of either location can look southward on Jefferson Street towards the college and see where Charles Lindbergh walked into town.