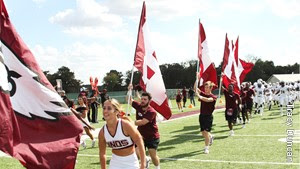 The Hinds Community College athletic department would like to invite everyone to the annual “Meet the Eagles” pep rally today (Wednesday, Aug. 28) where fans will be introduced to the various Hinds athletic teams.

The event, which serves as an unofficial kickoff for the 2019-20 school year, starts at 6:00 p.m. and will be held at Gene Murphyfield at Joe Renfroe Stadium.

Admission to “Meet the Eagles” is free.

Coach Larry Williams is back to lead the Eagles for a third season. Hinds is set to open at home against the preseason No. 1 ranked East Mississippi Lions tomorrow, Thursday, August 29 with kickoff at 6:30 p.m.

Hinds men’s and women’s soccer will continue their seasons on Friday, August 30 against Northwest Mississippi Community College. The Lady Eagle’s game will be at 5:00 p.m. with the men’s game to follow. The men’s squad is led by coach Doug Williams in his 19th season, while the women’s squad is led by Brandon Mitchell starting his second season at the helm.

Golf will begin their fall season with a tournament on Saturday, September 21 at Eagle Ridge Golf Course in Raymond. This will be the first Mississippi Association of Community and Junior Colleges Golf event which is intended to be a conference preview.

Hinds fans, friends and family now have the option to watch any Hinds Community College live-streamed or archived games from the comfort of their own homes and living rooms.

From your device (smart television or streaming device) and following your TV /device’s instructions for adding a new channel, search for Hinds CC. As instructed, add/install the Hinds CC channel to your current list of channels.

Once the Hinds CC channel is added, you can scroll and search for archived games or watch LIVE games as they are broadcasted. Hinds games are broadcasted in 1080p so they will look great on HD tvs.

Additionally, all the football games will be livestreamed on https://www.hindsccsports.net/channel1 with the live broadcast starting about 10 minutes prior to kickoff.