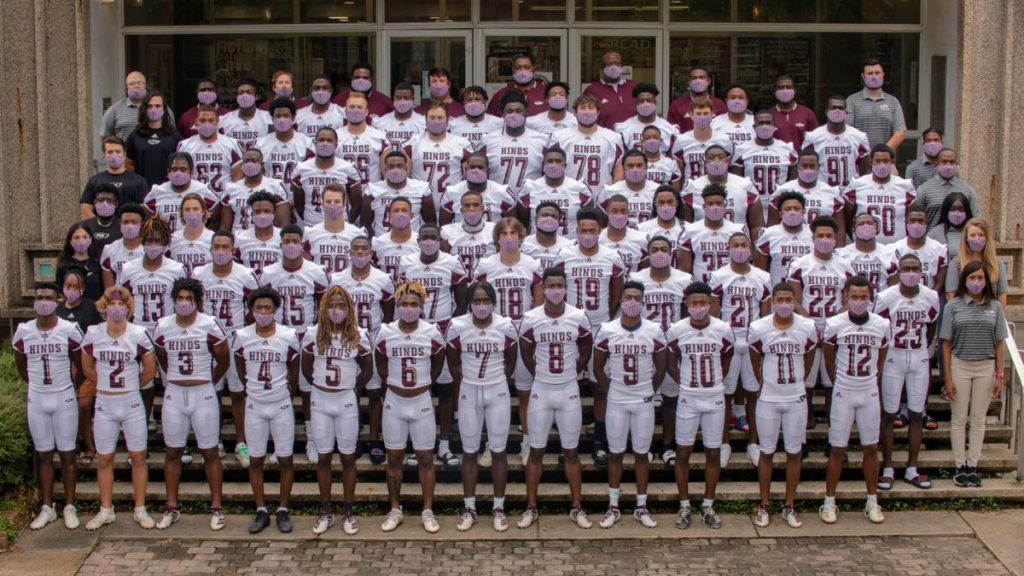 RAYMOND- Hinds will kick off the season on the road today (Oct. 8) in Perkinston against the reigning national champions, the Mississippi Gulf Coast Community College Bulldogs. Kickoff is scheduled for 7 p.m. This is the second consecutive year that Hinds will open their season against the reigning national champions. Last year (2019), the Eagles defeated the No. 1 ranked East Mississippi Community College Lions 24-16. The 2020 Hinds football program will look to build upon their successful 2019 campaign where they competed in the Graphic Edge Bowl and finished ranked eighth in the National Junior College Athletic Association (NJCAA) with a 7-3 overall record.

OFFENSE: The Eagle’s offense returns just eight players who were on the team last season. “This is a very young, but talented group of guys. We face a tough schedule to start the season, so it should be a good opportunity to introduce them to what Mississippi community college football is all about,” said offensive coordinator Kelly Murphy. The offense will be led by freshman dual-threat quarterback BeSean McCray (Orlando, Fla.). McCray is a transfer from the University of Central Arkansas. He will be backed up by freshman Kobe Dillon (Ferriday, La.). At running back, the Eagles return sophomore Robert Jackson III (Lexington) who will split carries with freshman Dajon Richard (Patterson, La.). Richard is a transfer from the University of South Alabama. At wide receiver, the Eagles return the dynamic talent of sophomores Jakarius Caston (Natchez) and Tabashi Thomas (Douglasville, Ga.). Caston will look to build upon his successful freshman campaign where he tallied 208 receiving yards and hauled in two touchdowns. Thomas will also look to build upon his freshman season where he hauled in a team-leading four touchdowns and tallied 409 receiving yards. Caston and Thomas will be accompanied at wide receiver by freshmen Deontez White (Camden), and Jaiden Burns (Canton). Other receivers vying for time include freshmen Cade Shepherd (Flora), Jeffery Malone (Macon), Niselbyion Kirk (Louisville), and Corey Wilson Jr. (Vicksburg). Freshman Malik Banks (Yazoo City) and Sophomore Marquis Tenner (Flowood) will serve in the role of tight end/H-back for the Eagles in 2020. The offensive line will be anchored by sophomores Ethan Boyd (Crystal Springs) and Jeremiah Brown (Canton). Freshmen Jonquez Roby (West Point), Chris Winston (Vicksburg), and Bryce Parkerson (Philadelphia) will look to fill the remainder of the starting line. Sophomores Antwuan Lampton (Lumberton) and Drake Diedrick (Florence) along with freshmen Joshua Johnson (Clarksdale), Braidron Hodo (Greenwood), and Justin Bryant (Pearl) will provide depth on the offensive line.

DEFENSE: The Eagle’s defense also returns just eight players who were on the team last season. “We return a few leaders from our defense last season, but there will be a lot of new faces on the field for us this season. We look forward to being fast, physical, and aggressive,” said defensive coordinator Kevie Thompson. The defensive line will be led by sophomores Jaylen Heffner (Batesville), Jaylon Ned (Lake Charles, La.), and Stefon Smith (Indianola). The trio combined to collect 69 tackles and 8 ½ sacks in 2019. Freshman Jaylen Ware (Starkville) rounds out the projected starting defensive line. Sophomores JaQuez Jackson (Monroe, La.) and Vertez Shorter (Vicksburg) along with freshmen Reginald Barnes (Pascagoula) and Justin Lee (Columbia) will provide depth to Eagle’s defensive line in 2020. The linebacker corps will be led by sophomore Ryan Davis (Clinton) and freshman Malik Sims. As a freshman last season, Davis collected 15 tackles including one sack. Also vying for time at linebacker for the Eagles, will be sophomore Albert Day (Camden) and freshman Thaddeus Bishop (Jackson). The Eagles secondary will feature just one returner in sophomore Artavious Washington (Lexington). Washington returns following a stellar freshman campaign where he recorded 17 tackles and one interception. The other projected starters in the secondary include freshmen Khiry Gee (Starkville), Ta’Darrius Williams (Hollandale), Jaylen Knight (Hattiesburg), and Sharman Holmes (Madison). Depth will be provided in the secondary by freshmen Kaleb Mosley (Louisville), Emahd Dabney (Jackson), Anthony Bullock (Columbia), Erick Short (Jackson), and Austin Day (Philadelphia). SPECIAL TEAMS Two talented sophomores Connor Smith (Vicksburg) and Houston Smith (Flowood) will handle the kicking duties for the Eagles in 2020. Connor Smith will serve as the kicker following his freshman campaign where he was perfect both on field goals and extra points in 2019. Houston Smith will serve as the punter following his breakout freshman season where he averaged 39.2 yards per punt and tallied 1,801 total punting yards. Cade Shepherd will serve as the holder and freshman Earnest Wade (Lexington) will serve as the long snapper. The kickoff and punt returners for the Eagles will be Jakarius Caston and Dajon Richard. Caston looks to build upon his 2019 season where he averaged 29.9 yards per kick return.

Fans will be able to watch all of Hinds football games live here: https://hindsccsports.net/channel-1/

You can also follow @HindsCC_FB for live in-game updates.