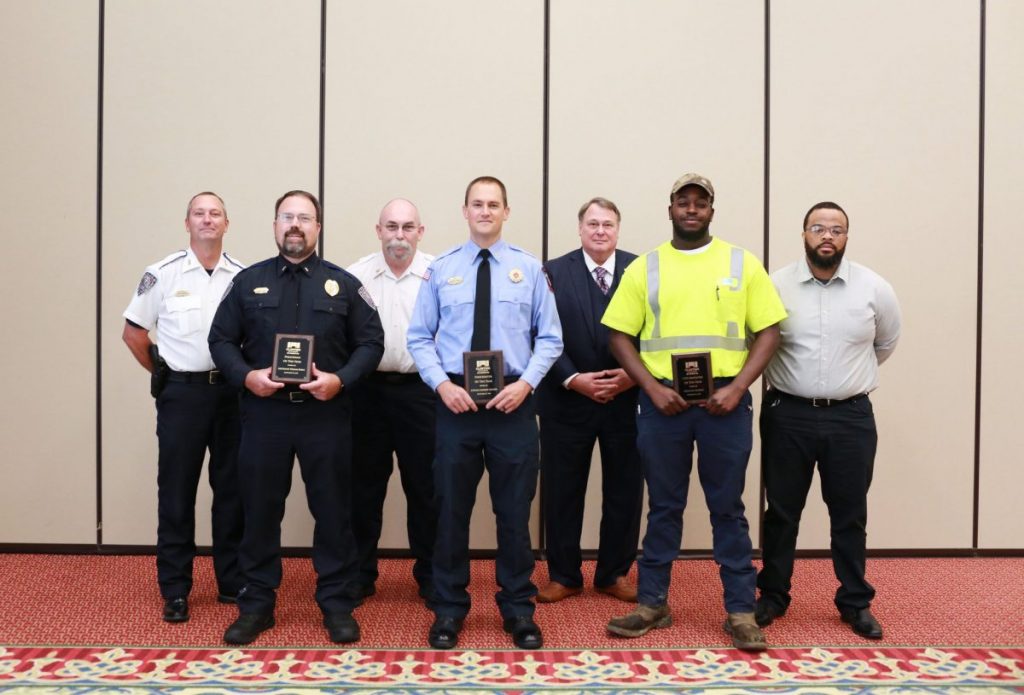 The Clinton Chamber, along with City leaders and community members, recently gathered for the annual Public Service Appreciation Luncheon to honor the city Fireman, Employee and Policeman of the Year. This year’s celebration recognized Clinton’s exceptional public servants and awarded each of the three honorees with a bag full of gifts from local businesses worth over $1,000.

The City Fireman of the Year, Captain Andrew Arthur, received high praise as a dedicated member of the force from Fire Chief Jeff Blackledge.

“He is one of the best firemen the department has had,” Blackledge said. “He has a solid work ethic that is a model to everyone. He is a team player and a leader, he brings out the best in his coworkers, he wants to help others advance in their careers, and he’s an overall great role model.”

“For over four years, he [Barber] has dedicated himself to the City and to the citizens of Clinton. He works every City Clean-up and loves interacting with the residents. He is a loyal employee who takes pride in his work and knows it is important in how people view our city.”

Interim Public Works Director Phillip Lilley echoed these sentiments during the luncheon presentation recognizing Barber’s outstanding service through a City department that is extremely vital to the community’s quality of life.

Leaders say Lieutenant William Burns, the Policeman of the Year, has displayed remarkable service to the community this year, as well. In March, Lieutenant Burns responded to a domestic disturbance at which an injured victim, trapped inside her home with the suspect, needed police and medical assistance. During the incident, Lieutenant Burns suffered a gunshot wound and showed valor in risking his life to reach the woman needing medical attention. Captain Ronnie Clark nominated Lt. Burns for the Policeman of the Year afterwards, noting how Burns “is a mentor to younger officers, able to get tasks done efficiently, and works well with the public in solving issues.”

Police Chief Ford Hayman also expressed his gratitude at the luncheon for having exemplary officers like Lieutenant Burns on the local police force.

The Clinton Chamber offers the Public Service Appreciation Luncheon each year to honor and celebrate the community’s wealth of extraordinary public servants. Robert Shelton and David Stevens, II, serve as the co-chairs of the voluntary committee for the luncheon.