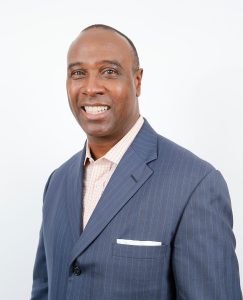 Charles Davis, analyst for the CBS Television Network’s coverage of THE NFL ON CBS
Photo: Courtesy of the National Football League

Jackson, Mississippi (April 20, 2021) – C Spire and the Mississippi Sports Hall of Fame have announced that Charles Davis, former University of Tennessee defensive back and veteran CBS NFL television analyst, will be the Master of Ceremonies for the virtual presentation of the C Spire Conerly, Gillom, Howell and Ferriss Trophies.  Due to pandemic restrictions and general health concerns, this year’s awards will be presented virtually on Monday, May 24.

The versatile Davis has worked as an analyst for both college and NFL for Conference USA, the Big East, ESPN Plus, TBS, TNT and Fox prior to joining CBS in April of 2020.  Besides his work in football, Davis has also covered NBA and college hoops and has worked as the analyst for Madden NFL video games.  Since graduation from the University of Tennessee, he also became the first African-American director of a PGA Tour event when he ran the Disney Golf Classic from 1998-2000.

Details on fan voting for each award and on how to watch this year’s presentation will be announced soon.

C Spire is a privately-owned telecommunications and technology company driven to deliver the best experiences in wireless, fiber internet, and business IT solutions such as internet, VoIP, cloud and managed services.  Read more news releases and announcements at cspire.com/news.  For more information, visit cspire.com or find us on Facebook, Twitter or Instagram.

About The Mississippi Sports Hall of Fame

The Mississippi Sports Hall of Fame exists to promote, preserve and protect Mississippi’s rich sports heritage for this and generations to come. The Museum serves as a destination for sports legends to live forever through interactive displays and exhibits where visitors can play, live and dream. The 501(c)(3) organization recognizes excellence in athletics and contributions to sports. For more information about the Mississippi Sports Hall of Fame & Museum, visit msfame.com or follow us on Facebook at www.facebook.com/mssportshofandmuseum or Twitter at www.twitter.com/mssportshof.