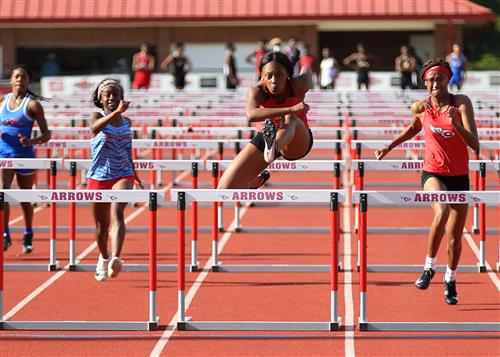 Here is the list of the Warriors’ MAIS 3A Overall Champions:

The boys track and field team finished in second at the MAIS 3A Overall Meet, sitting just 6.5 points behind champions Lee Academy. They were paced by Christian Parks who once again picked up wins in the 800 Meters, 1600 Meters, and 3200 Meters.

On the girls’ side, Maddie Bruner was the top Warrior finisher, tallying a fifth-place finish in the 400 Meters. Hanna Zeitz finished in sixth in the triple jump.

Here is a list of the Arrows’ individual MHSAA 6A State Champions:

The girls’ track and field team won their eighth consecutive MHSAA 6A State Championship. The Lady Arrows, who defeated Pearl by 53 points, were paced by three relay wins and solid jumping and throwing finishes.

The boys finished in second place behind Pearl. Despite wins in the 4×800 meter relay and high jump, they were edged by just eight points.

The Lady Arrows finished in 15th place out of 32 teams at the MHSAA 6A State Tournament. The two-day tournament was held at The Oaks Golf Club in Pass Christian.

The boys will be in action today and tomorrow at the Sunkist Country Club in Biloxi for their state tournament.

Both Mohit Kocher and Grayson Temple, the two Arrows who made it to the MHSAA 6A Individual Tournament, advanced to the quarterfinals before being eliminated. Kocher defeated Ryan Simmons of West Harrison 6-3, 6-4 before losing to top-seeded Walker Ellis of Madison Central. Temple knocked off third-seeded Owen Wilkinson of Oxford before falling to Erin Olander of Germantown.

The Arrows’ baseball season came to a close after they dropped two games to Desoto Central. Tyler Janos went a combined five-for-five at the plate with four doubles and two RBIs. Junior Grant Holmes gave the Arrows an early lead in Game one and added three RBIs and two runs scored. Tytrez Carr also hit a pair of doubles in the series.