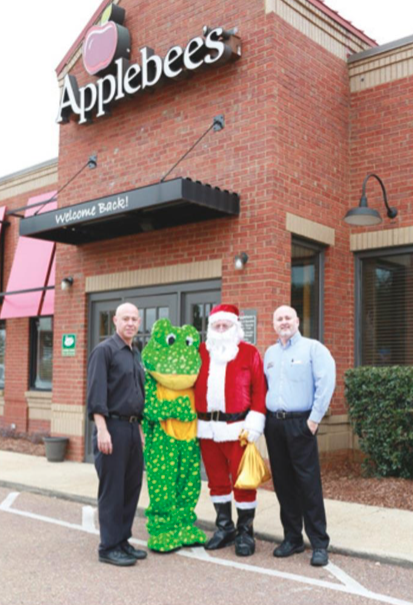 Applebee’s and the Froghead Grill have been neighbors for years, but this December, the pair of local restaurants are joining forces to bring holiday merriment to Clinton families by hosting “Pancakes with Santa” on Saturday, December 4.

“It all started with conversations between myself and Lynn Nettles, the general manager of Applebee’s,” said Froghead Grill owner Joshua Welch. “We were looking for ways to support the community.”

The pair of restauranteurs found that pathway in the Clinton Nature Center, which has seen its fundraising efforts stymied since the onset of the COVID-19 pandemic early last year. Applebee’s has hosted pancake breakfasts to support local businesses in the past, but the upcoming breakfast is unique, as it marks the first time the two restaurants have collaborated and is only the second such event that Applebee’s has hosted since the pandemic.

“What’s interesting is that Applebee’s is donating the facilities and the food itself, but the sponsoring organization provides the employees, so my employees will be in Applebee’s serving pancakes,” Welch said of the partnership. While the two businesses are donating the bulk of the labor and supplies, Arrow Printers and Mansell Media will be providing ticketing and mailing for the event, while SYSCO is slated to donate orange juice and milk.

Another special beverage will be on the menu, though, as the Froghead Grill will be supplying its own hot chocolate, popularized by the “Deck the Trails” event at the Clinton Nature Center, which was also sponsored by the Cajun-themed restaurant.
“We got well-known for that, so it will be there,” Welch said with a laugh.

The hot chocolate will be far from the most exciting aspect of the breakfast, as Santa Claus and Froghead Fred will be on hand to mingle with children and their families as they partake in the food and festivities.
“It’s the same day as the Clinton Christmas parade,” Welch reflected. “Everyone gets to see Santa on his float; but, if you come to the breakfast, he’ll get to talk to you at your table.”

This one-on-one time with everyone’s favorite North Pole resident is also special for Welch as a business owner, as he says that it’s a good way to repay a community that was supportive of its restaurants during the darkest days of the pandemic.
“The Froghead Grill and Applebee’s are two entities that, in some circumstances, could be considered competitors,” Welch reflected. “We appreciate that people don’t eat the same thing every night, and we can work together to promote the community. Through the pandemic, we were blessed to have community support when the straits were dire. They continued to support us, and community support is a two-way street.”

Those interested in helping the two local eateries give back to the community may purchase tickets for the Pancakes with Santa at the Froghead Grill, where staff members are competing to see who can sell the most tickets. Advance purchase of tickets is encouraged. If the event doesn’t sell out, a limited number of tickets may be available at the door.
Tickets are $5 each and will include two pancakes, two pieces of sausage and a beverage.

The event will take place from 7:30 a.m. to 9:30 a.m., and those who do not wish to dine in may opt to take their breakfast to-go.
All proceeds will benefit the Clinton Nature Center.