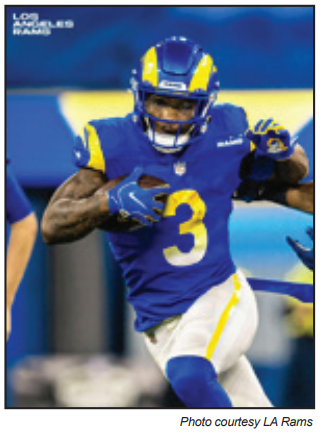 Clinton native Cam Akers made his highly anticipated return from injury yesterday afternoon. The Los Angeles Rams’ running back was activated for the team’s crucial Week 18 matchup with the San Francisco 49ers.  In limited action, Akers rushed five times for three yards and caught three passes for 10 yards. The Rams lost 27-24, but they still finished the regular season as NFC West Champions.

This was Akers’ first game action since he tore his Achilles before the start of training camp. The injury was considered by many to be season ending, but Akers made speedy progress with his rehabilitation. The hard-working running back returned to Rams’ practice on December 24th before finally being activated by the team this week.

Akers’ return is of great benefit to the Rams. He tallied for 748 total yards (625 rushing, 123 receiving) and three touchdowns in his rookie season. In the Rams’ Wild Card Playoff win over the Seattle Seahawks, he was the standout offensive performer as he rushed for 131 yards and a touchdown.

Akers and the Rams will now host the Arizona Cardinals, their division rivals, in an NFC Wild Card Playoff Game next Monday night. Kickoff from SoFi Stadium in Los Angeles will be at 7:15 CT, with the game being televised on ESPN and ABC.