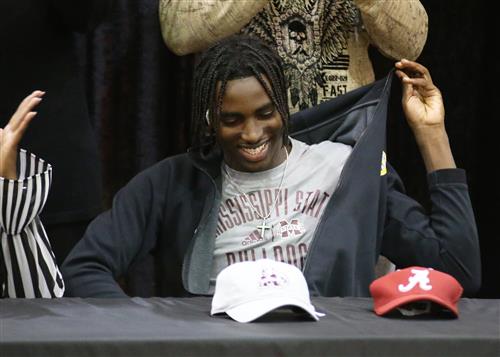 Clinton High School basketball player Kimani Hamilton has continued to rack up the individual awards, as he was named Mississippi’s Gatorade Boys Basketball Player of the Year last month. The 6-8 forward led the Arrows to their second consecutive Class 6A Championship this past season.

The Mississippi State signee averaged 18.5 points, 9.8 rebounds, 4.0 assists, 2.0 blocks, and 2.0 steals per game for the Arrows this season. He scored in double figures in three of the Arrows’ playoff games, and he saved his best game for the final game of his career.

Hamilton scored 24 points and grabbed nine rebounds in the championship game against Olive Branch, helping the Arrows fight back from a 15-point, fourth quarter deficit and win the title. He was named the championship game’s most valuable player for the second straight season, as well.

He joins his father, Tang Hamilton, as the only father-son duo to win the award in Mississippi history. The elder Hamilton had a storied career at Jackson’s Lanier High School before playing at Mississippi State and embarking on a professional basketball career.

Kimani will be following in his father’s footsteps by attending Mississippi State, where he will be looked at as a key figure in the Bulldogs’ upcoming campaign. The Bulldogs finished with an 18-16 record this past season, but they will be hoping for a spark with the incoming regime of new Head Coach Chris Jans and the incoming freshman duo of Hamilton and Martavious Russell.