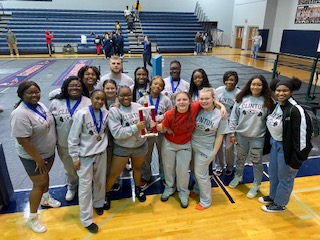 Clinton High School’s girls powerlifting team recently completed another great season. The Lady Arrows finished with a bang, ending with a third-place finish in the MHSAA Class 6A State Championship Meet. This was a stark improvement on the team’s 13th-place finish in 2021.

“I am very happy with the way the girls finished the season,” Head Coach Ethan Eubanks said. “This is my eighth year to coach the team, and this is the best we have ever finished.”
The Lady Arrows were paced by Madeline Scott (second in weight class) and Delijah Johnson (third in weight class), who are two of the team’s three seniors. Scott and Johnson tallied five points and three points at the state championship meet, respectively.

“The area that I saw the most improvement was in the determination the girls had,” Eubanks stated. “Some of our girls qualified for state last year and did not finish the way they wanted.”
“I think that had a lot to do with the success we had this year.”

Jasmine Rucker, a junior, added two points with a third-place finish in her weight class. Makayla Dotson, another junior, also tallied a point. These two lifters along with fellow junior Jacuria Cotton – the North State Champion in her class – will return to anchor a team that will look to build on this season’s finish. According to Eubanks, there will be new teammates ready to step in and fill the void that the seniors will be leaving.

“We had about thirty team members, but you can only compete with twelve,” Eubanks stated.

“The other girls who didn’t get the chance to compete are eager to fill some spots that will be available next year.”