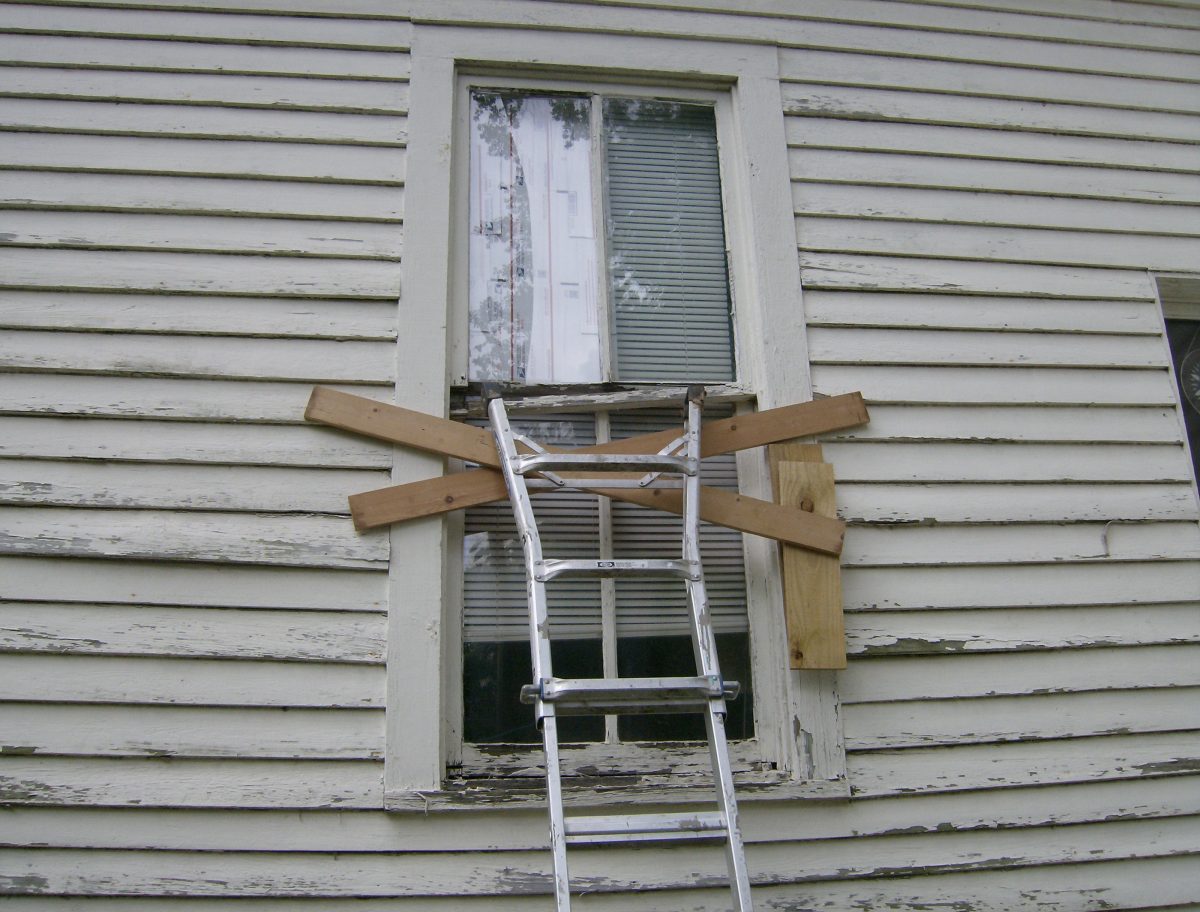 This past month, I convinced myself that I should not paint outside due to the excessive heat and incessant rain, but I thought that I could easily replace the mini blinds on a bedroom window.  After all, this is a very simple task so what could possibly go wrong in a 150 year old house?  As I was hanging the new blinds, I noticed that the outside window frame was sagging a couple of inches below the glass.  Asked and answered.

This window is on the downhill side of the house with the deep crawl space so of course a ladder will be involved, and for added fun the window sits above and next to the air conditioning unit so I cannot put a ladder on the left side of the window.  My first task was to nail some boards across the window frame that I could lean the ladder on so I could work on the window.  As I was trying to ease the sagging window frame back up into position, I managed to crack the glass from top to bottom.  Perfect, so this window frame issue was not going to be a simple fix, no surprise there.

I taped some cardboard over the glass to keep the daily rain from leaking into the house while I waited for one day in a row without rain in the forecast because the window caulking needs twenty-four hours to dry without getting wet.  I measured the window opening and had a new piece of glass cut to hopefully fit inside the window frame, and then I waited for it to stop raining for a day.

While I was waiting for a break in the weather, I resumed my quest to rid the crawl space of rats.  Before this month, I was seeing only one rat at a time, but now I saw two at the same time so I did not really know how many different rats were under the house.  My rat traps were working, but seemingly too slowly to get ahead of the influx of rats; I was removing a rat per week but there was always just one more rat.

With the weatherman’s promise of one day without rain in the forecast I went back to work on my window frame issue.  I put on my Frankenstein boots with the metal soles so I could stand on the ladder for awhile without my feet aching and complaining that they were too old for this stuff.  I managed to cut the old caulking from around the window and remove the glass without breaking it.  I tried again to put the sagging window frame back up into place but there was too much debris in the edge of the window frame.

The new piece of glass I bought was the correct size, so with a little very delicate persuasion I managed to push it into the frame completely.  I ran my new caulking around the edges, and the new window was securely in the old frame.  Feeling giddy from my window repair I started to paint the entire window frame for good measure, and because it really needed to be painted.  Since the window had not fallen out when I checked the next morning I declared it a success.  I intend to put another coat of paint on the window frame, but it has been raining every day again so this will have to wait another week or five for some clear weather.

Meanwhile, back under the house, I am still chasing a seemingly never-ending conga line of rats.  I cannot find the hole they are using to get under the house but there must be a map and directions posted on Rat Tok.  So far I have removed five rodents from under the house, well technically I removed four and our cat caught one running around in the yard and brought it to the front door just to mock me; I am not sure if the snake got any.

There is just one more rat under the house (I refer to him as Columbo), who refuses to enter any of the traps.  He will eat the sunflower seeds that are not in the traps, but will not go into any trap to eat the sunflower seeds there; at least so far.  But with a new month comes hope that the last rat will be removed from under the house, however many rats that turns out to be, and that the weather will be cooler and it will stop raining long enough for me to resume painting the outside of the house.