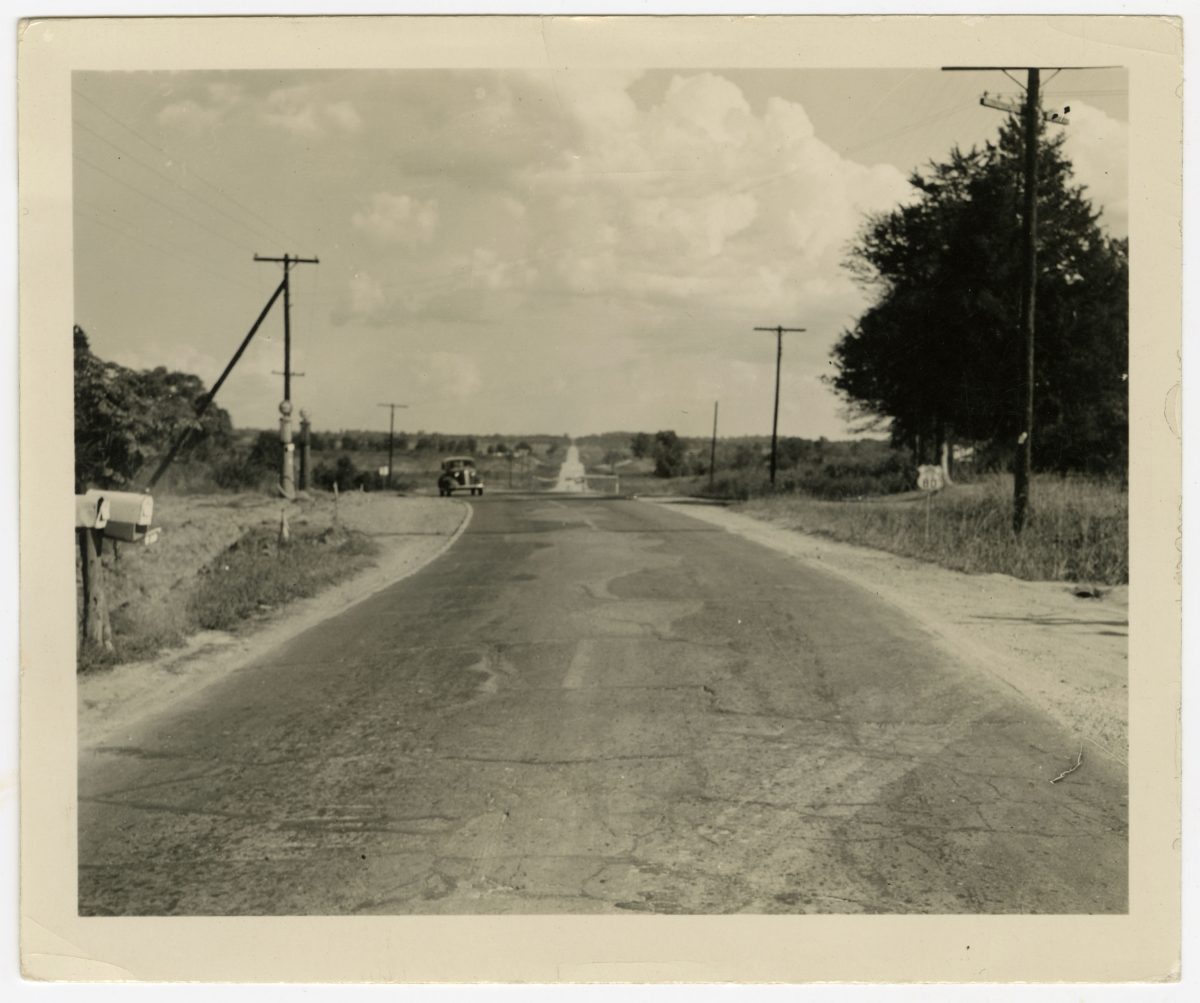 A car is pictured traveling from Clinton Boulevard onto College Street in 1947. The newly-relocated Highway 80 can be seen with road barriers in place because the highway had not ofﬁcially been opened onto College Street. Photo looks towards Jackson.

City ofﬁcials recently approved traf-ﬁc signage changes at the triangle where Clinton Boulevard and College Street merge. The stop sign on Clin-ton Boulevard was probably installed in 1947, after Highway 80 was relo-cated from the boulevard to the south of Jackson.
Clinton has always had a road con-necting the town with Jackson. As early as 1823, state ofﬁcials started building a road from Jackson west-ward towards Vicksburg (Walnut Hills). It was ﬁrst called the Jackson Military Road, and a segment sur-vives today as Old Vicksburg Road in Clinton.
In time, the route changed and con-nected to College Street in Clinton. The original road continued north of Clin-ton on to the west and connected with a road from College Street westward to-wards Vicksburg. This became a state highway in the early 20th century.
During the 1920s, an association of southern states began promoting a Dixie Overland Highway, which would start in Savannah, Georgia, and continue across the southern United States, passing through Clinton and on to San Diego, California. The asso-ciation lobbied the Congress; and, in 1927, the road became Highway 80.
Highway 80 crossed central Missis-sippi, passing through Brandon, cross-ing the Pearl River, and going through Jackson and connecting to Clinton Boulevard. The highway merged onto College Street in Clinton, passed through the town and made its way westward to Vicksburg. There was no stop sign at the boulevard exten-sion onto College Street. The highway passed in front of the Clinton schools and Mississippi College.
In the spring of 1940, students at Clinton’s schools and Mississippi College had a preview of what was to come when a massive convoy of vehicles (4,000) and troops (32,000) passed through Clinton on their way to the U.S. Army’s Louisiana maneu-vers. The convoy took four days to slowly pass through town, a continu-ing panorama for teachers, students and Clintonians to behold.
After the war, the state highway de-partment relocated Highway 80 from Clinton Boulevard in Jackson to a new road through south Jackson to College Street in Clinton, bypassing Clinton Boulevard, which remained a major artery from Clinton to Jackson. The highway department put up a stop sign at the Clinton Boulevard – High-way 80 intersection because of heavy trafﬁc on College Street.
In 1949, Barry Hannah was hit by a car while crossing College Street on his way to school. Young Hannah was only bruised, but the Clinton Cham-ber of Commerce began promoting the idea of relocating the highway from College Street to a route south of Clinton.
The major barrier to relocation was Lake Wilson, a twenty-four acre lake built after World War I near the south-east corner of Mississippi College. The college agreed to drain the lake in the early 1950s; and, by 1955, the highway passed south of the Odd Fel-low’s Cemetery, bypassing College Street.
A segment of the 1947 highway run-ning from College Street eastward to the Clinton Plaza Shopping Center and in front of the CVS drug store and the Clinton Medical Center can still be seen today. The Lake Wilson site can be recognized by the highway de-pression in front of Kroger that leads southward on Broadway Terrace.
Clinton is proud of its history, even the story behind a stop sign and why it was placed there in the ﬁrst place.