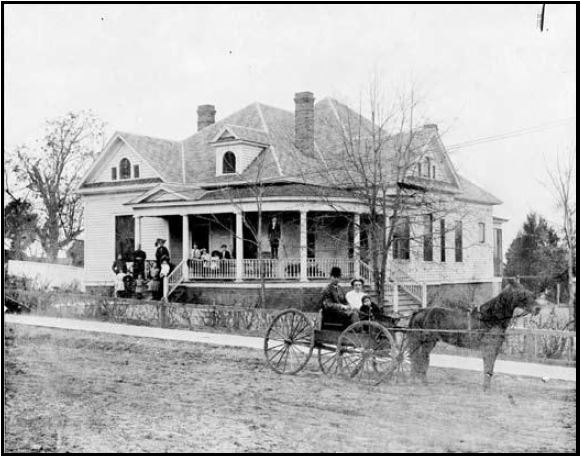 In the early 1900s, the railroad station was a center of town activity. Students hung out at the station at night to see who was coming and going (there was not much night life in Clinton then). The mayor and aldermen often had their meetings at the train station, since it could seat a lot of people.

Clinton’s “crime of the century” took place on September 29, 1908, when William Sorsby of Clinton shot and killed Charles Fitzgerald, a US postal inspector, on the loading platform of the Clinton railroad depot. Fitzgerald awaited a train to take him back to Jackson.
Clintonians were shocked by the murder. William Sorsby came from a prominent family and was wellknown to everyone. His mother and two brothers lived on the corner of Main and Capital Streets and operated a grocery store. Sorsby’s grandfather was a wellrespected Clinton physician.
Sorsby married Margaret Cabaniss, daughter of the late Judge Edwin Cabaniss, early in the century, and they lived with her mother at Violet Banks, the stately home on Jefferson Street. Mrs. Cabaniss was postmistress for Clinton, and Sorsby operated the post ofﬁce for her.
The facts of the murder were never in dispute. Charles Fitzgerald, United States postal inspector from the Jackson post ofﬁce, arrived in Clinton unannounced on September 28 to conduct a ﬁnancial audit of the Clinton post ofﬁce. During his examination, Fitzgerald discovered a $350 shortage in funds.
Fitzgerald planned to return to Jackson that evening, but Sorsby persuaded him to remain in Clinton overnight and reexamine the post ofﬁce records the following day. While Fitzgerald worked on his report, Sorsby went to the Clinton Bank and borrowed $350. He deposited $125 in the post ofﬁce bank account and covertly placed the other $225 in the post ofﬁce safe.
Fitzgerald spent the night as Mrs. Cabaniss’s guest at Violet Banks. He shared dinner that evening with Mrs. Cabaniss and William and Margaret Sorsby. Mrs. Cabaniss later testiﬁed she and her daughter knew nothing of her son-in-law’s problems.
During his second search of the post ofﬁce safe, Fitzgerald “found” $225 in cash. When asked about the other $125, Sorsby told him the post ofﬁce bank account had the balance. Sorsby and Fitzgerald went to the nearby Clinton Bank, where the teller, E. P. Anderson, conﬁrmed the amount in the postal account. Fitzgerald then asked Anderson how long the money had been there? The teller answered “since yesterday, when William Sorsby borrowed $350.”
Fitzgerald was angered by Sorsby’s deceit and said he would report the shortage to postal authorities. He ignored Sorsby’s pleas to accept the restored funds and let things be. While Fitzgerald remained at the post ofﬁce completing his reports, Sorsby left the building and planned the murder.
According to later testimony, Sorsby had a nephew rent a horse from Captain Lewis’s livery stable near the bank and have the horse tied to a post in front of Violet Banks that evening. He also arranged for his brother Alexander to drive his automobile to the railroad depot in time for the 8:10 train from Vicksburg. In addition, Sorsby secured a pistol.
After they closed the post ofﬁce at 7 p.m., Sorsby and Fitzgerald walked down Jefferson Street to the Clinton depot. Sorsby pleaded unsuccessfully with Fitzgerald to not report the shortage of funds. This continued while the two stood together on the depot platform awaiting the 8:10 train.
As the train from Vicksburg pulled into the depot, Sorsby pulled out a pistol and shot Fitzgerald in the chest. They were so close, Fitzgerald’s coat caught ﬁre. Fitzgerald fell to the platform, while Sorsby walked away from the depot.
Charles Fitzgerald died later that evening at a Jackson hospital. He was the ﬁrst U.S. postal inspector killed in the line of duty in postal history.
No Clinton crime for the remainder of the twentieth century equaled or surpassed the coldblooded killing of Charles Fitzgerald in 1908.