Homer Ainsworth, Joe Albritton and Waller King grew up in post-World War II Clinton. Homer was the older brother to two sisters, while Joe and Waller were both second sons. The three lived fairly close to each other on the west side of town and often walked or rode their bicycles together to school on College Street.
Homer’s family moved to Clinton before World War II. The father was a ﬁlling station operator and later became a preacher. The family lived in a rented house behind the Owl Café on College Street.
Friends described Homer as “reserved.” He was in Boy Scouts, but did not play sports. Classmates elected him president of his Junior Class at Clinton High, probably his highest student achievement. He was a counselor at Camp Garawya during summer youth camps. Homer enrolled at Hinds Junior College after graduation in 1949.
Joe Abritton’s father Richard was a World War I veteran who moved to Clinton during the 1920s to be the ﬁrst bursar (business manager) at Mississippi College. The Albrittons lived in a white cottage at the west end of Madison Street facing College Street. The home still stands at that location today.
Joe was a “free spirit” of the 1940s. His youthful exploits became legendary in Clinton. One story tells of Joe’s skills as a mechanic. When his older brother Dick, Jr. was courting a Clinton girl and parked the family’s one car in front of her house, Joe “hot-wired” the ignition and drove away, leaving his bicycle behind for Dick.
Joe was a substitute quarterback on the Clinton football team, playing behind Irvin Cronin, a three-year starter. Joe was short of stature, but played with the vigor and dash of a much larger and faster player. While a senior, he began a romance with Peggy Cain, a sophomore and campus beauty. Joe enrolled at Mississippi College in the fall of 1949.
Waller King’s family had roots in Clinton. His father, John King, Sr., was a star athlete at Mississippi College and a veteran of World War I. His mother was the daughter of a Clinton Baptist minister, Rev. George Riley. The Kings lived in Brookhaven, but moved back to Clinton in 1940. They lived on Madison Street.
Waller King was a star athlete and excellent student at Clinton High School. He was captain of the 1949 football team, lettered in basketball, was president of his Junior Class and the Key Club, and a member of the Beta Club. His classmates elected him “Most Likely To Succeed” and “Most Intellectual.” At the time of his graduation in 1950, Waller expected to play college football.
Homer, Joe and Waller were doing weekend training with the U.S. Marine Corps Reserve unit in Jackson when the Korean War began in June of 1950. They were called to active duty and sent to Camp Pendleton, California, for basic training. They shared the misery and demands of basic, but had the unique experience of being “extras” in two movies being ﬁlmed near the camp – Sands of Iowa Jima and Fighting Leathernecks – both starring John Wayne.
Joe Albritton ignored orders and took a photograph of Homer Ainsworth standing with John Wayne. It later appeared in the Clinton News. Joe also shared a weekend pass in Los Angeles with Peggy Cain, his new wife. They had married just before Joe left for basic.
Homer Ainsworth, Joe Albritton and Waller King were shipped to Korea on a troop transport in early 1951. They landed at Pusan in March. Three months later, Homer was killed in action.

EDITOR’S NOTE: This is the second in a series of four pieces by Dr. Walter Howell regarding the story of Ainsworth, Albritton and King. 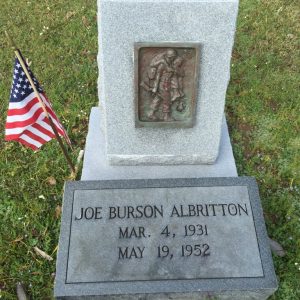