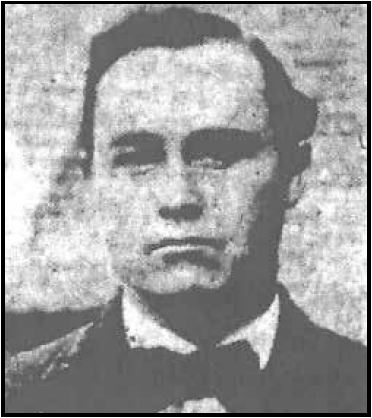 It was happenstance, not design, when James Anderson, director of the “Voices of Clinton” reading cast, selected the date of April 11, 2019, for the reenactment of “The Sorsby Murder Trial.”  The presentation begins at 7 p. m. in the courtroom of the Clinton Justice Building on the corner of Leake and Monroe Streets and falls on the one hundred and tenth anniversary of the celebrated trial.
William Sorsby was the former postal clerk in Clinton.  Everyone knew him from their daily treks to the post office to check on their mail. The Weekly Clarion ran a photograph of Sorsby on the front page of their January 14, 1909, issue, and readers knew what he looked like, a striking contrast to the wooly haired and unshaven fugitive captured after three months in hiding.
There were no questions about who shot and killed Charles Fitzgerald, the U.S. postal inspector, on the platform of the Clinton railroad depot in September 1908. Twenty-two passengers awaiting the train to Jackson witnessed William Sorsby shooting the victim. The defense claimed Sorsby was insane when he committed his crime.
A plea of “not guilty by reason of insanity” was seldom used in Mississippi murder trials and rarely successful. When Sorsby’s attorney entered the plea, Judge Porter ordered a mental examination of the accused by Dr. J. W. Buchanan, director of the East Mississippi Asylum in Meridian. The defense had its “expert” witness, Dr. Sydney Johnston, a physician in Vicksburg and childhood friend of Sorsby’s. Both doctors later testified.
The trial began with the state prosecutor framing the murder by calling on eyewitnesses to testify to the shooting. Postal officials and the Clinton bank teller explained how Sorsby had embezzled money from the post office and then tried to cover his crime with a loan from the Bank of Clinton.
The trial was held in the county court house in Jackson. It disrupted people in the quiet college town of Clinton. Many notable residents testified for the state. Captain William Lewis, a celebrated Civil War veteran, rented Sorsby a horse used in his escape. He testified Sorsby always acted normal around him.  Dr. William Lowery, president of Mississippi College, and faculty members Dr. John Provine, Dr. James Coleman, and Professor James Sharp all testified that Sorsby was sane.
John Abou, Clinton merchant and neighbor of Sorsby, testified that Sorsby came by his store on the day of the murder and confessed he had embezzled postal funds. When Abou said he had ruined his life, Sorsby replied, “Well, I was ruined anyway; had been checked up short, but paid it back.” Abou did not think Sorsby was crazy.
Family members testified that Sorsby was insane. State senator C. B. Vance, a cousin, said “all the Sorsbys were nuts.” Mrs. R. A. Ladner of Bay St. Louis, another cousin, admitted a large number of family members were in mental institutions.
Mrs. M. E. Benn and Ben Todd, both of Clinton and friends of the defendant, gave the unique perspective that Everett Sorsby was insane, and his son William looked just like him, inferring that looks could determine insanity.
Sorsby’s mother and his wife Margaret were the last witnesses for the defense. Both said he was crazy. The twenty-year-old wife of three years sat behind her husband during the trial. The weekly Clarion observed: “relatives and friends have done everything possible for him, and quite a sympathy has been worked up in his behalf, as well as on behalf of his sweet and devoted wife, whose sympathetic eyes have appealed powerfully to the jury, and doubtless made more impressions upon that body than did the speeches.”
The defense and state made their summations during the afternoon of Monday, April 12. The case went to the jury at the end of the day, and, to the surprise of everyone, the jury returned with a verdict the following morning, Tuesday, April 13, 1909 – one hundred and ten years ago.
To learn the fate of Sorsby, mark your calendar for April 11 at 7 p.m., to see the reenactment of the trial, to be held at the Clinton Justice Building. A follow-up epilogue is also scheduled for the next issue of The Clinton Courier on April 2.