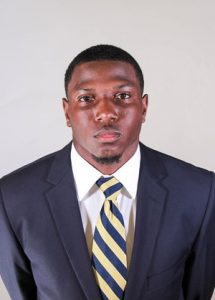 Mississippi College quarterback DeAnte Smith-Moore was named GSC Offensive Player of the Week after being instrumental in the Choctaws’ 42-21 road win over North Greenville. The sophomore from Cincinnati accounted for five total touchdowns on Saturday.

Smith-Moore is the first Mississippi College player since 2019 to be named GSC Offensive Player of the Week. Former running back Jordan Wright earned that honor after a two-touchdown performance against Shorter that season.

Smith-Moore rushed 22 times for 110 yards and four touchdowns in the game. The four touchdowns is the game-high for any player in the GSC this season. His final touchdown run was an important one, as it stretched the Mississippi College lead from seven to 14 points in the middle of the fourth quarter.

Smith-Moore was also efficient with his passing, as he completed three of five passes for 98 yards and another score. He broke a 14-14 tie with a 21-yard touchdown pass to Marcus Williams late in the first half. This touchdown gave the Choctaws a lead that they would not relinquish.

The Choctaws currently sit fifth in the GSC with a 1-1 record in conference play and a 2-2 record overall. They will host 13th-ranked West Georgia on Saturday, with kickoff from Robinson-Hale Stadium set for 2:00 p.m.