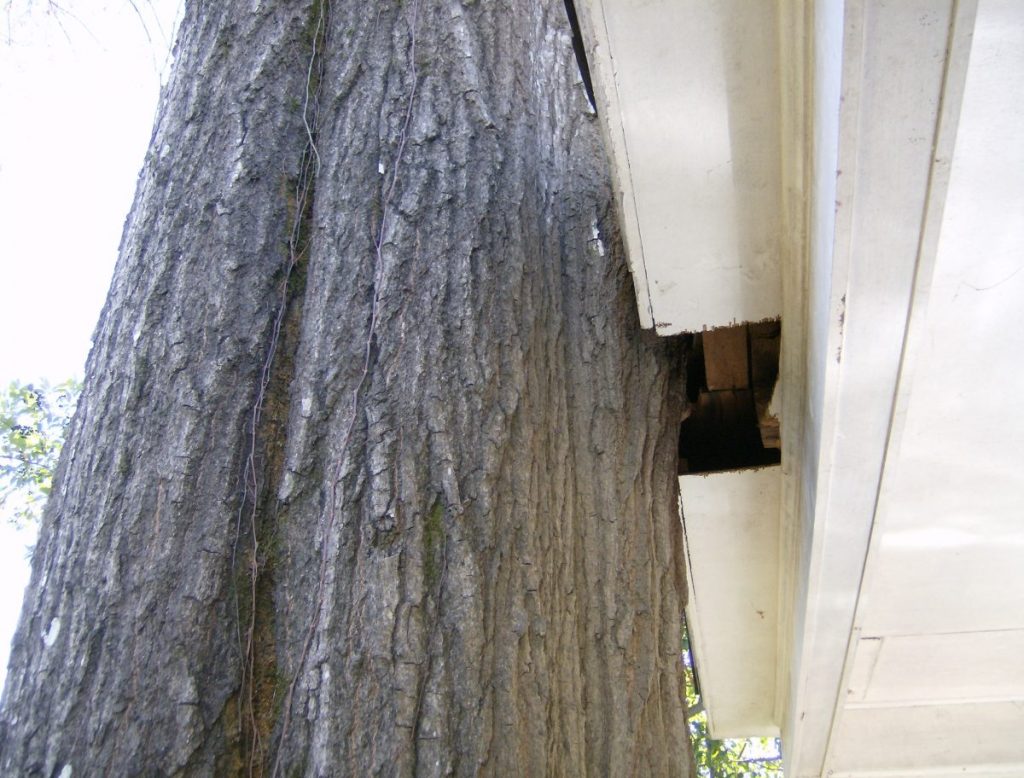 I noticed that our porta-cache’ was leaning a bit several years ago, but it did not seem to be a critical issue at the time. Although the reason for the lean was obvious, the best way to rectify the situation was not readily apparent to me. Sure, a notch seemed to be the answer but which side should be cut? After tisking about it an appropriate amount of time I decided to notch the porta-cache’ and leave the pin oak alone.

I do not know the correct spelling or definition of porta-cache’, but I would call it a carport. Our Olde House has two carports, the parking space for the carriage in the 1860s covered by the original porch roof, and also this car-cache’ added with its own roof for their new Ford Model T in the 1920s. I also do not know exactly how large the pin oak next to the car-cache’ was in the 1920s, but I am pretty sure the fact that in one hundred years this pin oak would be pushing on the car-cache’ roof was not considered, and rightly so.

My calculations would put our 48 inch diameter pin oak today at about 15 inches in diameter one hundred years ago when the car-cache’ was built. That would make the closest part of the tree about 13 inches from the edge of the roof overhang, whereas now it is 4 inches past the roof overhang, hence the need for a notch.

I thought about cutting a notch in the pin oak to clear the roof of the car-cache’, but decided that I did not want to inadvertently damage the tree and hasten its demise and subsequent fall on top of Our Olde House; not to mention angering the Creator of the tree which is never a good idea.

Fortunately, sort of, the car-cache’ has about an eight inch roof overhang on the side next to the tree. I decided to cut a notch into the overhang about two feet long and six inches deep to clear the tree. The depth of the notch was just a guess because I did not know if, or how far, the car-cache’ would move back toward the tree trying to regain its vertical position.

The roof of the car-cache’ is flat, covered with tar paper and some kind of roofing finish. It does not leak at all and I wanted to keep it that way. I decided to fold back the tar paper without cutting it away from the tree to hopefully keep its non-leaking integrity. I would just let the tar paper rest on the side of the tree sloping toward the roof after I notched the overhang.

The first trick to cutting a notch in the roof overhang was to not pierce the tar paper with my saw thereby creating a leak; this I managed to do while standing on a ladder. After cutting a notch in the overhang in front of and behind the tree it became apparent that the tree was not merely touching the overhang, but was pushing on it with all its might, which was considerably more than mine. I was able to finish cutting my notch but the wood in the notch would not fall since the tree was holding it in place.

After more tisking and wondering if the remaining wood in my notch was nailed in place too, I could not figure out anything else to do other than try to knock the wood out with my hammer. So I tried a few tentative taps with my hammer to see how stuck it was, which had absolutely no effect on moving the wood. A few harder taps, with no effect, quickly led to deranged pounding for all I was worth, with absolutely no effect.

Surely I must have loosened it up by now so my little sledge hammer seemed like a good next step. I dispensed with any tentative taps and smashed the wood hard with the little sledge, and lo and behold the wood moved. Granted, not much, but I would take any hint of success as positive.

I pounded away with renewed enthusiasm and the last piece of wood in the notch flew out and the car-cache’ moved about four inches toward the tree. So my estimated six inch notch depth was pretty close and still allows for the pin oak to gain another couple of inches in diameter.

I went back on the roof and straightened out the tar paper now touching the tree. No leaks or drips after a few rains so all is good. The front post on the car-cache’ looks perfectly vertical now, but the back post is still leaning, albeit much less than before. All I have left to do now is some trim repair and painting. 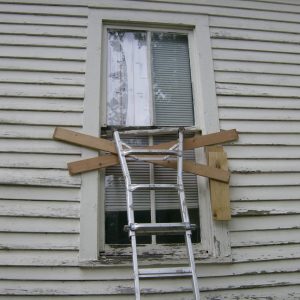 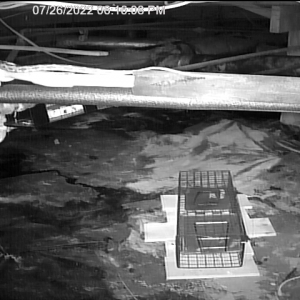 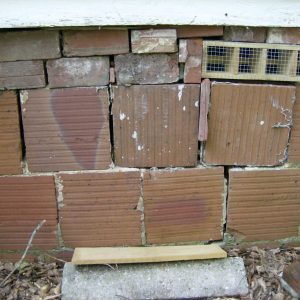 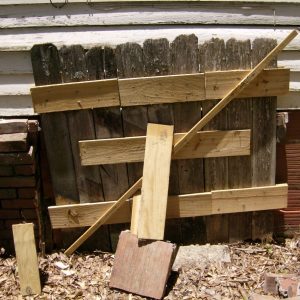 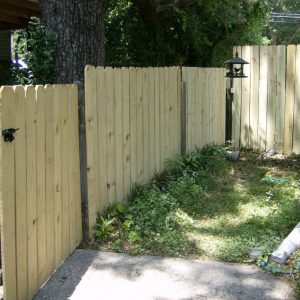