The Clinton High Arrows got a big 35-14 road win over Northwest Rankin (NWR) on September 2 at Flowood to start the season 1-1.

The Arrows host their oldest rival, the #1-ranked Brandon Bulldogs, on September 9 at Arrow Field. Kickoff is at 7:30 p.m.

Friday night is the 78th meeting of the oldest Jackson metro area rivalry.

Clinton leads the series with 42 wins, to 34 for Brandon and one tie.

Clinton‘s defense forced five turnovers at NWR and led 21-7 at the half, despite not scoring an offensive touchdown. Senior defensive back Quinton Whitehead returned two pass interceptions for touchdowns in the second quarter -one return for 48 yards and another for 24 yards gave the Arrows an early punch.

“I just happened to be in the right position both times,” said Whitehead. “We wanted to make some big plays early and get ahead.”

“I saw a path down the sidelines, and we had good blocking set up,” said Hutton.

Clinton got their offense going in the second half, leaning on senior running back Jakobe Calvin. The Arrows’ time-consuming 6-minute, 10-play, 70-yard drive was capped by Calvin’s 6-yard score with six minutes left in the third period to make it 28-7. Calvin‘s three-yard run with 10:50 left sealed the game, 35-7.

Calvin finished the night with 103 yards of offense, 69 yards rushing and 44 yards receiving.

“This was a big road win for us,” said Calvin. “We got a lot of momentum going for us now.”

“Our defense and specialty teams really played well tonight,” said Arrow head coach Judd Boswell. “We still have some things to clean up, but this is a big Class 6A road win, and I am proud of the way the team responded tonight.”

A week earlier, Clinton fell by 18 points at home to then-#6-ranked Ocean Spring (OSHS). The Arrows’ defense did not have an answer for Greyhound (Ocean Springs) quarterback Bray Hubbard, who scorched the Arrows’ defense for 280 yards of offense. On the ground, he had 120 yards rushing and 160 yards through the air passing.

The Arrows’ offense never could get in sync without a long-sustained drive the whole night. Clinton’s only points came off of Jakobe Calvin’s two-yard run, with 10:30 left in the first half to take a 6-0 lead following a missed point after. The drive was only 22 yards after the Arrows blocked a punt.

Hubbard and the Greyhounds then proceeded to score 24 unanswered points to lead 24-6 at the start of the fourth period. Hubbard engineered two period drive yards in the second period to take a lead 14-6 at the half. OSHS led for good on Hubbard’s 13-yard pass to Bryshen Smith with eight minutes left in the half. After Clinton only picked up one first down, the Greyhounds made it 14-6 on Will Smith’s three-yard run with thirty seconds left in the half.

Ocean Springs took the second half kickoff and had a 42-yard drive to go up 17-6 with Brad Edminston’s 33-yard field goal. After Clinton went three and out, Hubbard’s one-yard run capped a 59-yard drive to make it 24-6.

Then came Clinton’s best offense play of the night on Calvin’s 76-yard burst to score and make it 24-13 off of Hayden Wolf’s extra point. Hubbard threw another TD pass with 3:46 remaining to make it 31-13.

The Arrows had one last scoring opportunity, but Calvin was smothered at the Greyhoud 2 on fourth down in the final minute.

“We’ve got to play better offensively,” said eleventh-year head coach Judd Boswell. “We played pretty good defensively against a quarterback like Hubbard. But we couldn’t get off the field and let them make some big plays on third downs. It was a hot and humid night, and we left our defense on the field 60 plays because we could not move the ball much on offense. We will get better on both sides of the ball.”

Offensively, Calvin had thirteen carries for 110 yards and two touchdowns. Senior QB Jordyn Battee had eight carries for 63 yards, but completed only four of eleven passes for 74 yards on offense. 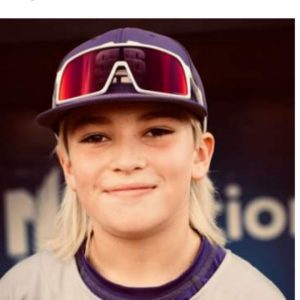 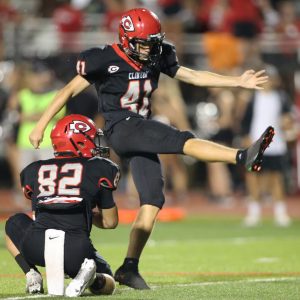 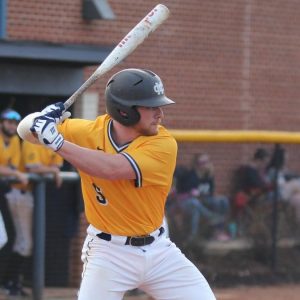