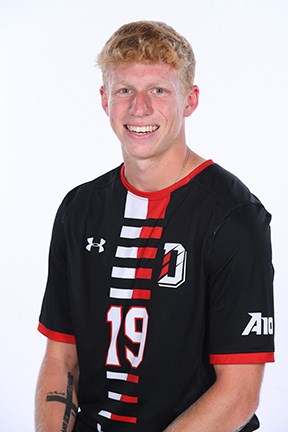 Clinton native Luke Bryant had been waiting for the opportunity to get back on the soccer field for Davidson College. The 2020 Clinton High School graduate anticipated having his freshman season at the North Carolina-based college in the Fall of 2020, but the COVID-19 pandemic had other plans for Bryant and his teammates. The Atlantic-10 Conference, which Davidson is a part of, moved its soccer season to the spring. But sadly, Bryant was only able to play in two matches before having a season-ending leg injury.

Fortunately, he was able to recover and feature for Mississippi Brilla FC this summer in USL League Two. Bryant, the son of Brilla General Manager Rusty Bryant, played in 14 matches and tallied two assists for the Mid South Division Champions.

Now, he’s back in North Carolina helping Davidson get off to a flying start this season. The Wildcats opened their season with a pair of 3-1 victories over 24th-ranked High Point University and Campbell University, respectively. The team currently is ranked 22nd in the Top Drawer Soccer National Rankings.

Bryant started both matches and assisted his team’s first goal against Campbell. The right-footed defender has played 140 minutes and is making himself a mainstay in the Davidson lineup.

The next match for Davidson will be the team’s toughest so far. The Wildcats will host fifth-ranked North Carolina on Monday night. This will be Bryant’s first opportunity this season to take on a highly-ranked team from the ACC, which is arguably the top men’s soccer league in the country.

Fans can watch Bryant and the Wildcats play North Carolina on ESPN+. The match will kickoff at 6:00 p.m. C.T. on Monday night.