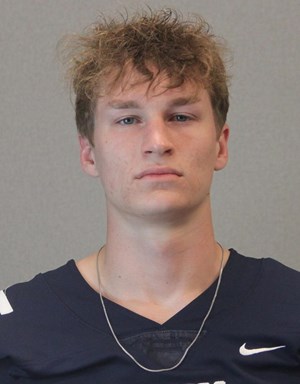 Like many other athletes, 2019 Clinton High School graduate Tucker Barefoot plied his trade in multiple sports. He was a standout in both football and soccer in high school.

Barefoot handled kicking and punting duties for the Arrow football team. In the Arrows’ Class 6A State Championship season of 2016, he played in every game, making seven of eight field goals. During his senior year, he showcased his leg with forty-seven touchbacks. He also had a 39.3 yard punting average and hit six of nine field goals.

However, football ultimately was the sport that Barefoot chose to play at the next level. Towards the conclusion of his senior year, he signed with Northwest Mississippi Community College on a football scholarship. The Senatobia-based Rangers have one of the best programs in the country and have finished in the top-ten of the NJCAA football rankings in each of the last five years.

Barefoot handled the placekicking and kickoff duties for the Rangers in the 2020 season. He went seven for twelve on field goals and twenty-two for twenty-three on extra points. He also tallied 1,844 kickoff yards and fourteen touchbacks.

The Rangers finished the regular season with a six and zero record. They clinched the MACCC North Division title and secured a spot in the MACCC State Championship game. It was in the Rangers’ most important game of the season that Barefoot had his best performance.

Barefoot went four for four on field goals as well as four for four on extra points. He also drilled a forty-three-yard field goal kick in the first half, which was a season-long for him. The Rangers thrashed Mississippi Gulf Coast forty to thirteen, securing the state championship and the NJCAA National Championship in the process.

Barefoot wasn’t finished yet. He parlayed his solid season into a spot on a Division I roster. He transferred to Southern Miss as a preferred walk-on for the 2021 season. He enrolled at the school in January and will compete for the starting kicker position this fall.

Barefoot and the Golden Eagles will open their season with a road game against South Alabama on September 4.