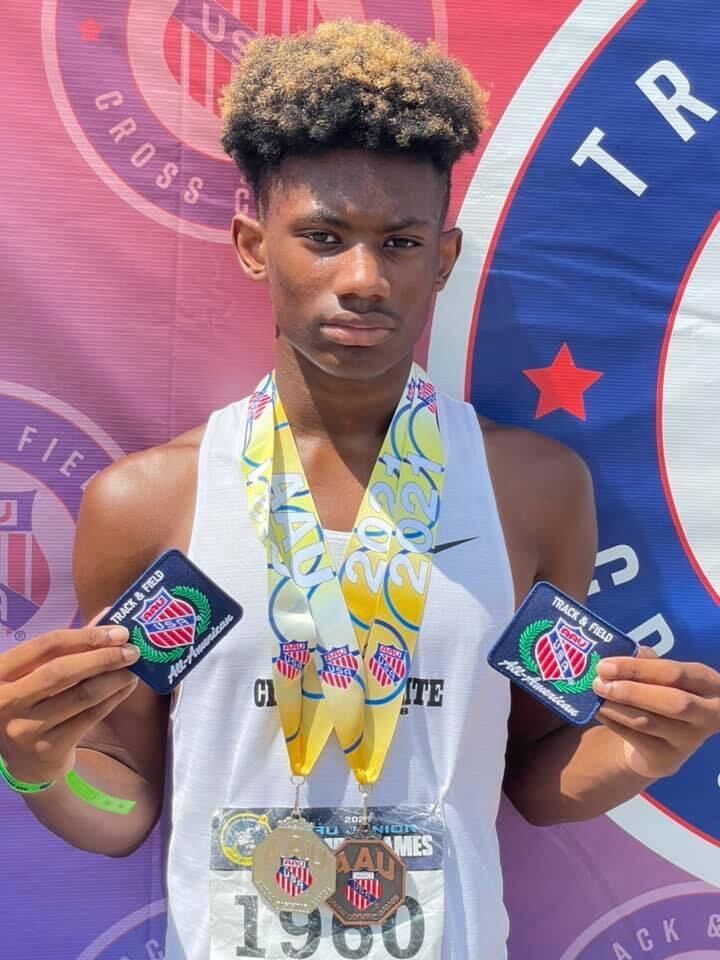 Over the past few years, Clinton has arguably become the most talent-rich track and field city in the state. Clinton High School has won a combined nine MHSAA Class 6A Track and Field Championships since 2013. Coached by Johnathan Perkins and other staff members, young men and women pass through the successful Arrow and Clinton Elite Club programs on their way to become college athletes. Aiden Knox is on his way to being one of those next athletes to make his mark.

Knox, a student at Clinton Junior High School, competed in the 13-year old division at the 2021 AAU Junior Olympics in Houston, Texas, in August. He tallied a silver medal in the 100-meter dash and a bronze medal in the 200-meter dash. The medals were an impressive haul for the CJHS eighth-grader. By virtue of finishing in the top-eight of his events, Knox also earned two AAU All-American honors.

“The Junior Olympics was a great opportunity for me,” Knox said. “I really enjoyed it.”

The AAU Junior Olympics has been held annually since 1967 and is one of the largest youth athletic events in the country. Athletes from across the country ages six to 23 compete in a range of different sporting events. In the track and field division, 12,345 athletes competed, which was the third-most ever in Junior Olympics history. In the midst of a saturated competitive field, the cream rises to the top. Knox managed to beat the best of the best and leave Texas with two medals.

Knox’s appearance in the Junior Olympics was his first. He had come close to qualifying in 2019, when he finished in sixth in both the 100- and 200-meter races at the region qualifier.

2021 was a different story, as Knox entered the AAU Region 11 Qualifier in Hammond, Louisiana, as an older and more experienced sprinter. He ran the 100 meters in 11.64 seconds, tallying a second-place finish. He also came in second in the 200 meters, running it in 23.55 seconds. Both runner-up finishes were good enough to qualify Knox for the 2021 AAU Junior Olympics.

The SELRR-Rollette Invitational in July served as a de-facto Junior Olympics warm-up for Knox, and he promptly swept the 100-meter and 200-meter titles there. Next up for him was the main event in Texas.

The final was next on Knox’s agenda. He carried his fine form into the final and finished in third, giving him the bronze medal. Knox’s time of 23.16 seconds was his second-fastest time of the year, and it secured him a spot on the medal stand by just 0.25 seconds.

The 100-meters is Knox’s favorite event, and in the preliminary round of the 100 meters, Knox was the fourth-fastest runner out of 88. He ran it in 11.33 seconds, which was his fastest time of the year. In the semifinals, he finished with a time of 11.44 seconds which was the fifth-fastest. This comfortably qualified him for the finals.

In the final of the 100-meters, Knox crossed the finish line in 11.64 seconds. This secured him a spot on the medal stand as the silver medalist, giving him his second medal of the competition.

The top-eight individuals in each event earn the distinction of AAU All-American. This was Knox’s main focus before starting the Junior Olympics.

“My goal was to at least make the finals and become an All-American,” he said. “I was grateful to do that.”
Knox was able to exceed his expectations by reaching the medal stand twice.

Success was a long time coming for Knox. He has run with the Clinton Elite Club since he was in fourth grade. Perkins as well as Coach Justice Sims were instrumental in getting him prepared for the Junior Olympics. Sims specifically helped train Knox for the 200-meters. She is another one in the pipeline of talented Clinton track athletes, as she ran for Perkins at CHS before eventually moving on to the Division I level with Mississippi State.

“I’m really grateful to my coaches for helping me to get where I am right now,” Knox said.

Knox practiced three times a week. He gave up spring football to have extra time for track and field training. He also did extra work at home, dedicating time to do 100 sit-ups and push-ups each day.

The theme of gratitude runs deep with Knox. On top of his coaches, he knows that his family has been a major part of his success, as well. His parents, Derian and Micca Knox, as well as younger brothers Ethan and Jaxon, have been supportive to him along the journey. His father Derian, a former track and field athlete as well as college football player at Jackson State, was Knox’s first coach and helped instill the love of the sport within him.

“My family really means a lot to me, and I’m grateful to them for helping me with this opportunity,” Knox humbly stated.
There’s no rest for the weary, as the hard work will continue for Knox this school year. He currently plays on the CJHS eighth-grade football team, where he features at both wide receiver and cornerback.

Eventually he’ll return to the track, where he will run for the CJHS track and field team. He has already set goals for the upcoming season.

“I want to get 10s and 20s this year,” he confidently stated. “But mainly I just want to continue to improve and get better on the track.”