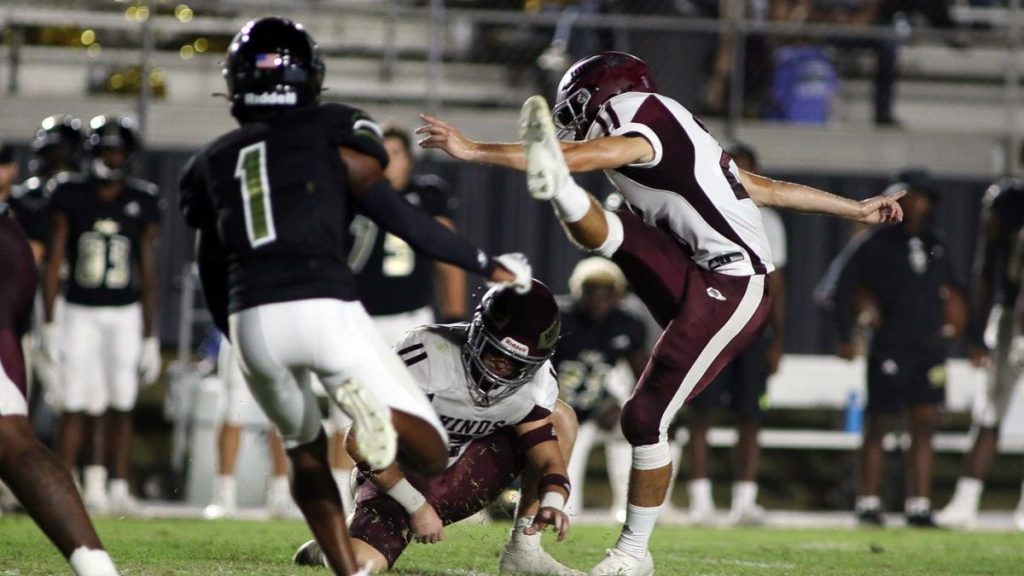 The Hinds Community College Eagles grabbed the 18-13 win over Northeast Mississippi Community College Thursday evening (Sept. 16). This win was a direct result of the four turnovers by the Eagle defense and the 10 points contributed by freshman placekicker Ben Duncan (Florence).

Early in the game, the Eagle defense forced a Northeast safety, giving Hinds the 2-0 lead. Getting great field position on the ensuing kickoff, the Eagle offense went to work, going 10 plays for 79 yards. The drive ended with a 10-yard touchdown throw from BeSean McCray (Orlando, Fla) to Jaiden Burns (Canton) to give the Eagles a 9-0 lead. Northeast later drove deep into Eagle territory, capping off the drive with a 12-yard touchdown pass to bring the score to 9-7. Later on, Ben Duncan was called out to attempt a 25-yard field goal to extend the Eagle lead. Duncan split the uprights to give Hinds the 12-7 lead at the break.

Northeast received the ball to start the second half, but their drive stalled on their 38-yard line. Hinds then went 14 plays for 64 yards, capped off by a Ben Duncan 27-yard field goal. This field goal was Duncan’s second of the evening. On the ensuing possession, Northeast scored on a 14-yard pass, but they couldn’t convert the two-point conversion. The Eagles were up 15-13 at the end of the third quarter.

Ben Duncan then cashed in his third field goal of the game from 32 yards out, giving the Eagles the 18-13 lead with 5:29 left in the game. The game came down to the final drive by Northeast. The Tigers drove deep into Eagle territory on five consecutive completions. At the 1:20 mark, the Eagles stepped up when it mattered and recovered the Northeast fumble. Jaylen Knight (Hattiesburg) came up with the ball. The Eagles went into the victory formation and put the game on ice.

Up next for the Eagles is a home contest against Mississippi Gulf Coast Community College. The game is set to kick off at 6:30 p.m. at Joe Renfroe Stadium in Raymond next Thursday (Sep. 23).