The Hinds Community College men’s and women’s track and field teams continued their trend of excellence at the National Junior College Athletic Association (NJCAA) Indoor Championships this past weekend.

On the women’s side of things, Trishauna Hemmings made the Finals and placed second in the Women’s 60 Meter Hurdles.

“I thought overall we did a great job with a lot of people competing in the finals in their respective events. Todd did an outstanding job and brought home another National Championship back to Hinds. I thought the women did a really good job especially in the relay race. The men competed really hard as well. As always, there are things we need to improve on and get better at as we head into the outdoor season,” said head coach Reginald Todd.

Hinds Track and Field will begin their outdoor season Wednesday, March 27 when they host the Hinds Relays in Raymond. 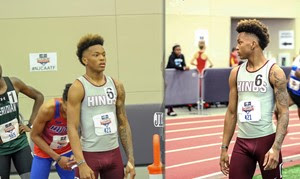